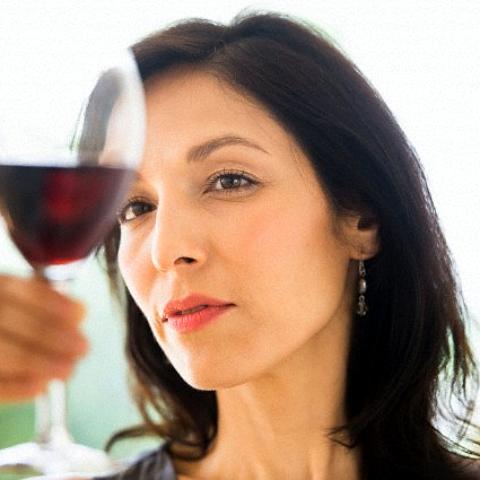 The 4 S's: Seeing, Swirling, Smelling and Sipping
"The most important way to learn about wine is to taste as much of it as possible," says Sbrocco. But you can't just drink a bottle of wine each night and expect to breeze your way through a conversation with a sommelier. That's where the "4 S's" come in. By breaking up the tasting process into four components—seeing, swirling, smelling, and sipping—you'll start to properly identify the different components of a wine. This will help you to eventually figure out your personal tastes, as well as what to look for when choosing a wine.

Step 1: Seeing
Once you've poured your wine into a clear glass, examine the color. As a general rule, white wine will be darker if it's older, while red wine will be lighter if it's aged for a longer period of time. The color can also tell you about the process used to make the wine: Chardonnay, for instance, will be golden due to its aging process, which typically occurs in oak barrels.

Step 2: Swirling
Move the wine around the glass gently, aiming to coat the sides of the cup. This will release the aromatics of the wine, which will help you to better identify scents.

Step 3: Smelling
"If initially you simply smell ‘red' or ‘white,' that's fine!" say Sbrocco. Keep sniffing in order to identify the following scents:
If it's a white wine, see if you can identify citrus notes, like grapefruit, lemon, and lime; or ripe, tropical fruits, such as pineapple or melon. Cooler places will generally produce more citrusy or tangy-smelling wines, while ripe smells indicate warmer locales. Additionally, some white wines may produce aromas of vanilla or oak.
If it's a red wine, most red wines will either have red berry scents, like cherry and strawberry, or darker, riper smells, including blackberry and plum. Wines produced in cooler places will tend toward the red berry side of the spectrum, while warmer locations will lend themselves to a darker, riper scent. Red wines can also have earthier aromas, like coffee, smoke, or chocolate.

Step 4: Sipping
When you take your first sip, what you taste is a combination of the actual flavors of the wine, as well as the scent because taste is heavily influenced by smell.
"The first question to ask yourself: Do you like it? Or do you not like it?" says Sbrocco. Then try to identify the different flavors you've smelled, along with characteristics such as sweetness, tanginess, and alcohol content.
Source: lifehacker.com