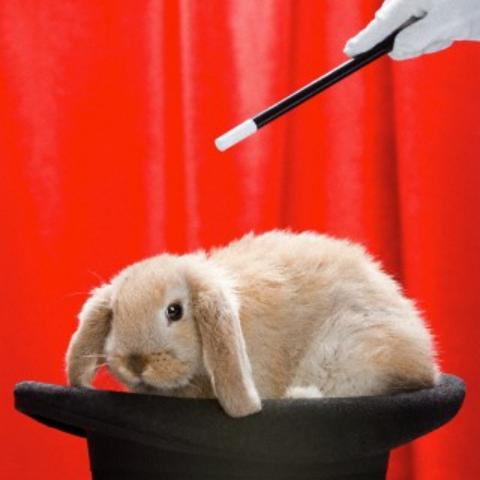 Magic is an act performed by tricksters. A magic can be an illusion, a deception or a science which isn't yet popular. well, It's actually an art. Magic is famous not from today but since a very long time. All of us like the magic shows, and if we can perform it - it feels like dream come true :)
Anyone can try magic. And if you are still an amateur in this profession, even than you can perform some simple tricks, but remember it demands some practice and workout. So here five simple tricks from the famous magician Sir Pattabhi Ram' s book.:)
Sir Pattabhi Ram is the first magician in Asia to receive doctorate by a University for his services to the art of Magic.

Magic trick #1 Three dates
Here our first trick is a popular trick by Sir David Ginn, a native of Atlantic City in USA. He is a full time magician but basically a journalist. Sir Ginn always includes dainty tricks for children in his performance.
Material Required - A Calendar, plain paper and a pencil.
Magic : Give a young boy a calendar and ask him to choose 3 successive dates from it. Any 3 successive numbers from 1 to 31 will do as long as they are consecutive. For example, 24,25 and 26. This must be done unrevealed to you. Ask the boy to add the 3 of his chosen date and give you the sum. you can provide him the actual dates he had opted in some moments. :)
Secret: This a very simple trick. once you have the aggregate value of the three dates, all you have to do is to divide the total by 3, which will remain as one of the dates. Add 1 to get the date after and subtract 1 to get the date before. simple isn't it?

Magic trick #2 (Become a Maths Wizard)
Now our second trick is a simple, mind-reading party trick. However remember!! it requires a careful performance
Sir Pattabhi Ram used to perform this trick in his high school. His friends often called him mathematical wizard, though himself he says -'he never secured good marks even in elementary mathematics.' :D.
Materials required: Cut 5 cardboard circles and write seven numbers in every card, as shown in illustration.
Magic: Place all the cards on the table and declare you will be reading the mind of a member in the audience. Let someone come forward. Ask confidant to think of a number between 1 and 14, and than pick up every card that bears his number. The moment he completes this you can easily announce his number.
Secret : All you have to do is add the numbers in middle of every card left over on table and subtract the sum from 15 to get the number of your choice.
Isn't it simple ?? :)

Magic trick #3 (Juggler's Trick)
Third trick is the one performed by a roadside juggler, saying it as a miracle box of matches used to predict result.
Materials Required: Two match-stricks, a box of matches and an office pin.
Magic: Let's continue the juggler story to explain you well....
Once a boy offered himself as a subject. The juggler showed him two matchsticks taken from the miracle box and asked him to drop one in a glass full of water. Every Time boy dropped the matchstick in the water, the stick floated in horizontal position. Finally, magician provided him with another match-stick asking 'repeat the act'. This time match stick dint float in water but remained in vertical position. And the juggler predicted the boys gonna secure a first class. Sooner, the boy stopped taking interest in his studies and, as you may have guessed by now, he failed to satisfy the examiners.
Secret: The easiest way to make a match-stick float vertically in a glass of water is, push a soft headed pin at the end there is no red phosphorous. When match stick is dropped in make sure the pin end is emerged in water.
That's it :)

Magic Trick #4 (MatheMagic)
In the west, magicians are called professors and it is necessary for them to be well versed in mathematics, chemistry, physics, stage craft, narration, acting etc. The sciences are a part of their show. While entertaining kids, tricks based on mathematical principles have been found to be popular. They are rather interesting and educative. lets look at one:
Materials Required: a calculator.
Magic: Give a calculator to a friend and ask him to press the numbers from 1 through 9, except 8. Than ask him/her to choose any no. from display panel. Suppose if he chooses no. 5 than tell him to multiply the original no. i.e. 12345679 by 45. As soon as he does this on his calculator he gets the answer 555555555 on the display panel. He/she may be surprised to see that all the numbers are the same(all 5s) as the number selected by him/her.
Secret: The secret of this trick does not lie in calculator. The magic no. is one you told your friend to multiply 12345679 by i.e. 45. Whichever number your friend chooses you have to multiply that by no.9 to provide him magic no. For instance he had chosen 5, you'd get 9x5=45. This no. is than multiplied by 12345679. And you'd get the answer 555555555. Try doing the same thing with other no. and make your friends rather bewildered. :)

Magic Trick #5 (The Obedient Pencil)
Materials Required: An empty bottle, black nylon thread of 2 feet length and bee's wax.
Magic: Show the audience an ordinary pencil and allow them to examine it thoroughly. Drop it in an empty bottle and move your hand over chanting a few magical words. Hey Presto! The pencil slowly begins to rise in the bottle. When you say 'go down' it descends. When you command it to ascend it rises much over audiences' surprise. you can show the audience the pencil at the end of the show.
Secret: This is a simple trick which even a small boy can perform effectively. While performing, you have to wear a black coat or a shirt. Tie one end of the black nylon thread to your button and dab a small bit of wax on the other end. While the audience are busy examining the pencil and bottle, take the waxed end into your left hand. Take the pencil into your right hand and casually press the waxed end into the bottle. Now if you move the bottle away from your body, the pencil rises. Practice this trick in front of a mirror to make the show work. You can show the pencil for inspection after removing the wax with your fingers.
Have a nice time magicians.
Source: hubpages.com