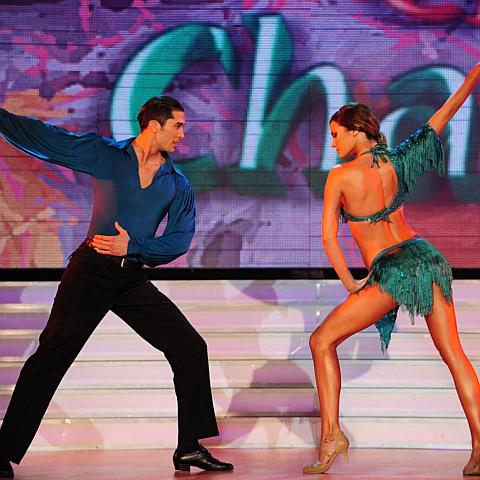 The cha-cha is a popular Afro-Cuban dance that is often danced at ballroom dance events as well as Latin clubs. Cha-cha music is written in 4/4 time and around 30 measures per minute (120 beats per minute) with a medium-to-fast, syncopated feel.
Cha-cha is generally done as a partnership dance, which means the "leader" (traditionally - though not necessarily - meaning the man) will control the flow of the dance, guiding the follower and deciding what patterns to do, etc, while the "follower" (traditionally the woman) will try to match the leader's movements and timing.

Basic step of cha-cha-cha
The basic pattern involves the lead (usually the man) taking a checked forward step with the left foot, retaining some weight on the right foot. The knee of the right leg must stay straight and close to the back of the left knee, the left leg having straightened just prior to receiving part weight. This step is taken on the second beat of the bar. Full weight is returned to the right leg on the second step (beat three).

The fourth beat is split in two so the count of the next three steps is 4-and-1. These three steps constitute the cha-cha-cha chasse. A step to the side is taken with the left foot, the right foot is half closed towards the left foot (typically leaving both feet under the hips or perhaps closed together), and finally there is a last step to the left with the left foot. The length of the steps in the chasse depends very much on the effect the dancer is attempting to make.
The partner takes a step back on the right foot, the knee being straightened as full weight is taken. The other leg is allowed to remain straight. It is possible it will shoot slightly but no deliberate flexing of the free leg is attempted. This is quite different from technique associated with salsa, for instance. On the next beat (beat three) weight is returned to the left leg. Then a cha-cha-cha chasse is danced RLR.
Each partner is now in a position to dance the bar their partner just danced. Hence the fundamental construction of Cha-cha-cha extends over two bars.
The checked first step is a later development in the International Cha-cha-cha. Because of the action used during the forward step (the one taking only part weight) the basic pattern turns left, whereas in earlier times Cha-cha-cha was danced without rotation of the alignment. Hip actions are allowed to occur at the end of every step. For steps taking a single beat the first half of the beat constitutes the foot movement and the second half is taken up by the hip movement. The hip sway eliminates any increase in height as the feet are brought towards each In general, steps in all directions should be taken first with the ball of the foot in contact with the floor, and then wibutt faceth the heel lowering when the weight is fully transferred; however, some steps require that the heel remain lifted from the floor. When weight is released from a foot, the heel should release from the floor first, allowing the toe to maintain contact with the floor...
Source: wikipedia.org, wikihow.com