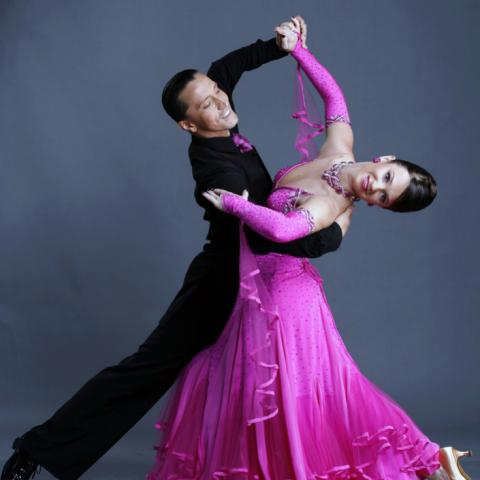 The romantic Waltz is one of the most popular ballroom dances of all time. Considered by some as the "mother of present day dances" and the "backbone dance" of the ballroom, the Waltz is the basis for many dances. Developed in Germany, the Waltz is popular all over the world. A truly romantic dance, the Waltz is comprised of soft, round, flowing movements.
Below are simple steps to learning how to waltz. Go step by step, and check your progress.

2. Waltz Dance
There are many variants of Waltz dancing; one of which is called as the Viennese Waltz, being a bit faster than the original one. In international Waltz, dancers are in a closed position, but if we consider the American variant of Waltz dance, it is entirely opposite to the international one. The Cross Step Waltz is a new for of Waltz, in which the first step is a cross step taken in the line of direction.
There are also other different styles of Waltz in different countries like Mexican Waltz or Peruvian Waltz but they follow the same basic theme. For learning Waltz dance, one has to get himself trained and mastered in few steps given below...

3. Basic step is the Box
Box step is said to be the most basic step of Waltz dancing, in which you have to move your left foot forward, then bring forward your right foot, then with your left you touch the right foot and then you have to get back to original position. So, the steps are taken to make a box, so the name given as the "box step."

4. The Progression
This step is actually the progression of the box step. In this step, after completing the box step, instead of getting back to the original position, you take another step forward. In this way the dancer actually moves across the floor.

5. Twinkle
This might seems a bit complex by making a connection between the two dancers. It starts with the first step in any direction and followed by a close and then followed by another step in a different direction. This allows the lady partner to turn around on the beats one, two and three; the turn usually takes place on" and" of the count.

6. The Promenade
This step is for the quick movements, usually done on the balls of the feet. On the first count, left foot is moved forward. The right touches on the beats two and three, without touching the floor. Then the right goes forward on fourth count, with the left forward on count five, and lastly, on count six, the right foot is brought to meet the left foot.
Now, putting together all these steps with a rise and fall, you can get a beautiful and an elegant dance.
Source: learnthis.org, dance.about.com