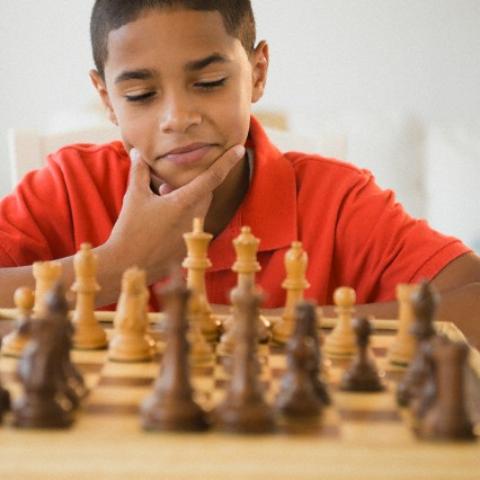 - Chess is called the game of kings, because for many centuries it was played primarily by nobility and the upper classes.

- The Isle of Lewis chess pieces are the oldest surviving complete chess set known. Discovered on they Isle of Lewis, they are made from walrus tusks and show their characters in a range of bad moods - from anger to depression.

- The names of the pieces-- the queen, king, knight, rook and bishop came about during the Middle Ages, when society was extremely oriented towards war and rigidly stratified. During the Renaissance period, society became more dynamic and rules were added to enable rapid attack techniques. These include making the queen more powerful, and permitting pawns to move two squares on the first move.

- The rook is named from an Arabic word rukh, meaning chariot. This reflects its ability to move quickly in straight lines, but not leap over obstacles. During the Middle Ages, when chariots were no longer in use, the rook was gradually modified to look more like the turret of a castle.

- The knight's role has been stable over time. Even in the earliest versions of the game, it represented the cavalry and had the unique ability to leap over its opponents.

- The word "checkmate" comes from the Persian phrase "shah mat," which means "the king is defeated."

- The Arabic world, the Chinese, and later the Europeans used the chessboard as a tool for calculating and a means for expressing mathematical concepts. In medieval England, financial accounts were settled on tables resembling chessboards. When the Normans created the royal office of collection for the crown, they called it the Exchequer, and its minister the “Chancellor of the Exchequer”, because the court originally used a checkered cloth to cover the table where judgments were made. Exchequer comes from Old French, where eschequier meant counting table, and eschec meant chess. This makes the "Chancellor of the Exchequer" literally the "Chancellor of the Chessboard!"

- Lewis Carrol’s novel “Through the Looking Glass” was based on a chess game, much the way “Alice in Wonderland” was based on playing cards. The idea for picturing the countryside as a chess board came from Lewis Carrol’s days in Oxmoor, where his apartment overlooked a cultivated moor, separated into neat, rectangular farmer’s fields.

- The folding chess board was originally invented in 1125 by a chess-playing priest. Since the Church forbid priests to play chess, he hid his chess board by making one that looked simply like two books lying together.
Source: luxurychess.com