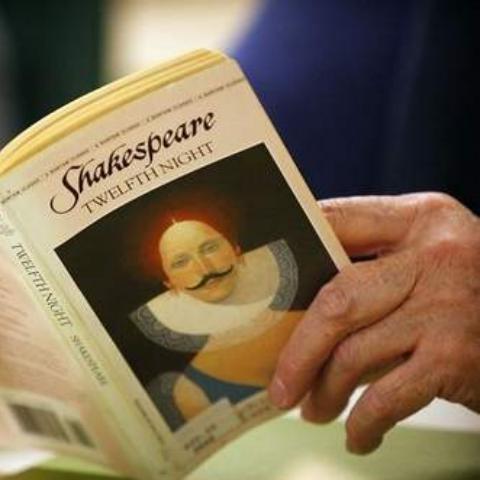 There is no doubt that Mr Shakespeare is the greatest writer of modern English to date – his plays have been made into movies, his sonnets have appeared in books and music, and his works translated in to hundreds of different languages. His contribution to the English language is probably larger than that of anyone else. If you have not read all of the plays below, you should certainly try.

10.Othello, The Moor of Venice
This tragedy is believed to have been written in approximately 1603. The work revolves around four central characters: Othello, his wife Desdemona, his lieutenant Cassio and his trusted advisor Iago. Attesting to its enduring popularity, the play appeared in seven editions between 1622 and 1705. Because of its varied themes — racism, love, jealousy and betrayal — it remains relevant to the present day and is often performed in professional and community theatres alike. The play has also been the basis for numerous operatic, film and literary adaptations.

9.The Taming of the Shrew
This comedy is believed to have been written between 1590 and 1594. The play begins with a framing device in which a drunkard is deceived into thinking he is a nobleman who then watches the “play” itself, which depicts a nobleman, Petruchio, who marries an outspoken, intelligent and bad-tempered shrew named Katherine. Petruchio manipulates and “tames” her until she is obedient to his will. The main subplot features the courting of Katherine’s more conventional sister Bianca by numerous suitors. The content has become the subject of considerable controversy. The play has been adapted numerous times for opera, stage, screen and musical theatre.

8. Twelfth Night or What You Will
This play is named after the Twelfth Night holiday of the Christmas season. It was written around 1601 and first published in the First Folio in 1623. Like many of Shakespeare’s comedies, this one centers on mistaken identity. The leading character, Viola, is shipwrecked on the shores of Illyria during the opening scenes. She loses contact with her twin brother, Sebastian, whom she believes dead. Posing as a man and masquerading as a young page under the name Cesario, she enters the service of Duke Orsino. Orsino is in love with the bereaved Lady Olivia, whose brother has recently died and decides to use “Cesario” as an intermediary. Olivia, believing Viola to be a man, falls in love with this handsome and eloquent messenger. Viola, in turn, has fallen in love with the Duke, who also believes Viola is a man and who regards her as his confidant.

7. Julius Caesar
This tragedy is believed to have been written in 1599. It portrays the conspiracy against the Roman dictator of the same name, his assassination and its aftermath. It is one of several Roman plays that Shakespeare wrote, based on true events from Roman history, which also include “Coriolanus” and “Anthony and Cleopatra.” Although the title of the play is “Julius Caesar,” Caesar is not the central character in its action; he appears in only three scenes and is killed at the beginning of the third act. The protagonist of the play is Marcus Brutus and the central psychological drama is his struggle between the conflicting demands of honor, patriotism and friendship. The play reflected the general anxiety of England over succession of leadership. At the time of its creation and first performance, Queen Elizabeth, a strong ruler, was elderly and had refused to name a successor, leading to worries that a civil war similar to that of Rome might break out after her death.

6. Richard III
The play is an unflattering depiction of the short reign of Richard III of England and is believed to have been written in approximately 1591. The play is sometimes classified as a tragedy (as in the earliest quarto); but it more correctly belongs to the histories, as classified in the First Folio. It picks up the story from Henry VI, Part III and concludes the historical series that stretches back to Richard II. After Hamlet it is Shakespeare’s second longest play and is the longest of the First Folio, whose version of Hamlet is shorter than the Quarto version. The length is generally seen as a drawback, for which reason it is rarely performed unabridged. It is often shortened by cutting peripheral characters.

5. Macbeth
This is among the best-known of Shakespeare’s plays and is his shortest tragedy, believed to have been written between 1603 and 1606. It is frequently performed at both amateur and professional levels and has been adapted for opera, film, books, stage and screen. Often regarded as archetypal, the play tells of the dangers of the lust for power and the betrayal of friends. For the plot Shakespeare drew loosely on the historical account of “King Macbeth of Scotland” by Raphael Holinshed and that by the Scottish philosopher Hector Boece. There are many superstitions centred on the belief the play is somehow “cursed” and many actors will not mention the name of the play aloud, referring to it instead as “The Scottish Play.”

4. Midsummer Night’s Dream
This romantic comedy was written sometime in the 1590?s and portrays the adventures of four young Athenian lovers; a group of amateur actors; their interactions with the Duke and Duchess of Athens, Theseus and Hippolyta; and with the fairies who inhabit a moonlit forest. The play is one of Shakespeare’s most popular works for the stage and is widely performed across the world.

3. Henry V
Believed to be written in 1599, it’s based on the life of King Henry V of England and focuses on events immediately before and after the Battle of Agincourt during the Hundred Year’s War. The play is the final part of a tetralogy, preceded by “Richard II,” “Henry IV, Part 1? and “Henry IV, Part 2.” The original audiences would thus have already been familiar with the title character, who was depicted in the “Henry IV” plays as a wild, undisciplined lad known as “Prince Hal.” In “Henry V,” the young prince has become a mature man and embarks on an attempted conquest of France.

2. Romeo and Juliet
This play is an early tragedy (and likely Shakespeare’s first) about two teenage “star-cross’d lovers” whose “untimely deaths” ultimately unite their feuding households. The play has been highly praised by literary critics for its language and dramatic effect. It was among Shakespeare’s most popular plays during his lifetime and, along with “Hamlet” is one of his most frequently performed plays. Its influence is still seen today, with the two main characters being widely represented as archetypal young lovers. This is the singularly greatest romance ever written and has been continuously adapted to each generation in musicals, cinema and the theatre.

1. Hamlet
Written between 1599 and 1601, this play is set in Denmark and recounts how Prince Hamlet exacts revenge on his uncle Claudius, who murdered the King, takes the throne and marries Hamlet’s mother. The play vividly charts the course of real and feigned madness — from overwhelming grief to seething rage — and explores themes of treachery, revenge, incest and moral corruption. “Hamlet” is Shakespeare’s longest play and among the most powerful and influential tragedies in the English language. During his lifetime the play was one of Shakespeare’s most popular works and it still ranks high among his most-performed, topping, for example, the Royal Shakespeare Company’s list since 1879. It has inspired writers from Goethe and Dickens to Joyce and Murdoch and has been described as “the world’s most filmed story after ‘Cinderella.’” The title role was almost certainly created for Richard Burbage, the leading tragedian of Shakespeare’s time. It’s arguably the greatest drama ever written and in the four hundred years since, it has been played by the greatest actors and sometimes actresses, of each successive age.
Source: listverse.com