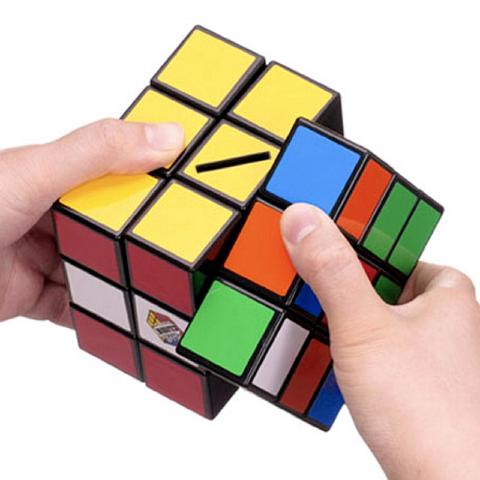 - Ern? Rubik invented the Cube in the spring of 1974 in his home town of Budapest, Hungary. He wanted a working model to help explain three-dimensional geometry and ended up creating the world's best selling toy.

- Rubik's inspiration for the Cube's internal mechanism came from pebbles in the River Danube whose edges had been smoothed away.

- Rubik called his invention the 'Magic Cube'. It was renamed the Rubik's Cube by the Ideal Toy Corporation in 1980.

- More than 300 million Rubik's Cubes have been sold worldwide. If all the cubes were placed on top of each other it would be enough to reach the North Pole from the South Pole!

- At the height of the Rubik's craze in the mid-1980s, it was estimated that one-fifth of the world's population had played the Cube.

- 'Cubing' still infects people of all ages. 'Cubaholics' are said to suffer from 'Rubik's wrist' and 'Cubist's thumb'!

- Rubik's Cube has featured in hundreds of books, magazines, movies and even had its own TV series on ABC in America. Millions of web pages, blogs and YouTube videos are now dedicated to cubing.

- The Cube has inspired everything from fashion, architecture and music to films, plays and political speeches. There is also a dedicated art movement known as 'Rubikubism'.

- There are edible cubes, jewel-encrusted Cubes and even MP3 playing cubes! The biggest Cube in the world, on display in Knoxville, Tennessee, is 3 metres tall and weighs over 500kg.
- National and international 'speedcubing' championships have been held regularly since 2003. The World Cube Association now runs competitions where players have to solve the Cube one-handed, as well as having to solve the Cube using only your feet. There is even a competition where players have to solve the Cube as quickly as possible blindfolded!

- In May 2007, Thibaut Jacquinot of France became the first person to complete the Cube in under 10 seconds in open competition, setting a world record time of 9.86 seconds. The current world record for a single solve was set in March 2013, by Mats Valk with an incredible time of 5.55 seconds!!

- The speed Cubing Championships were held in Budapest in October 2007 and were attended by Ern? Rubik himself.

- In 2007 the Rubik's Cube beat stiff competition to be recognised in the annual CoolBrands list by the Superbrands organisation.
Source: rubiks.com