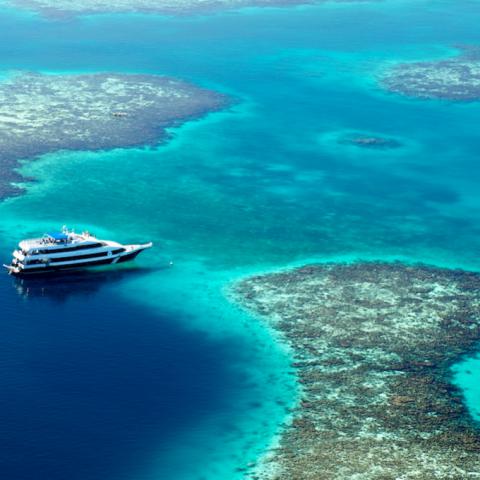 The list of the Seven Underwater Wonders of the World was created by CEDAM International (Conservation, Education, Diving, Awareness and Marine research), a non-profit organization of divers.
1.Belize Barrier Reef .It is the largest barrier reef of the western hemisphere and the second of the world. Its beauty has no comparison in the world.

2.Deep Sea Vents - Ecuador. They are also known as hydrothermal vents. They sustain some of the most bizarre and impressive ecosystems of the world, since these ecosystems are to a great depth and live without sunlight.

3.Galapagos Islands - Ecuador .This archipelago is the home of some of the most beautiful and impressive species of the world, which inspired to Charles Darwin to create the Evolution Theory.

4.Palau Reefs - Palau. It is one of the Seven Underwater Wonders of the World and is one of the most biodiverse Corals Reefs of the world.

5.The Great Barrier Reef - Australia. It is the largest Corals Reef of the world and is the only collective organism that can be seen from the orbit of the Earth.

6.The Lake Baikal - Russia. It is the deepest lake of the world and the largest reservoir of fresh surface water of the planet and host a great variety of endemic species of flora and fauna.

7.The Northern Red Sea - Jordan. It is considered one of the best places of the world to do scuba diving, it is known also as the 'Underwater Garden of Eden'.
Source: 7wonders.org