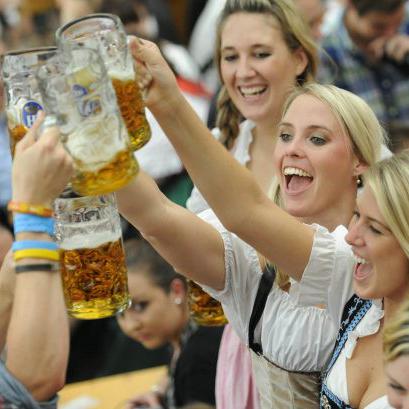 Oktoberfest is a festival in Munich, which is celebrated for sixteen days, every year at the ending of September. The Oktoberfest is one of Germany's major events and the largest fair in the world. The festival is famous for the beer and wine available there.
The Oktoberfest festival was started on October 18, 1810, in honor of the marriage of King Ludwig I and Princess Therese of Saxe-Hildburghausen. Since 1950, the festival has become a major event and by the year 1960, the festival has turned into a worldwide major event.
The area of the festival is about 103.49 acres, with 100,000 seating capacity even though 6.2 million people visit. About 6,940,600 liters of beer, 79,624 liters of wine, 32,047 liters of Sparkling wine, 222,725 liters of coffee and tea are consumed.
Source: famouswonders.com