Go to the MACY's Thanksgiving PARADE 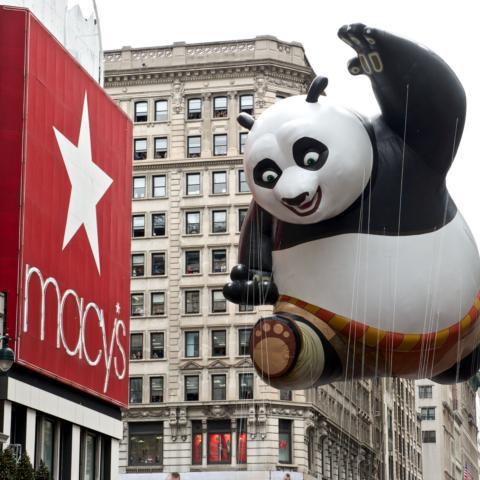 The Macy's Thanksgiving Day Parade is as much of a Thanksgiving tradition as pumpkin pie, and with the parade going strong after more than eight decades this year's parade will sure to entertain millions of turkey-hungry viewers. With all of the balloons, floats, marching bands, and entertainment involved in the parade, it's easy to forget some of the great history behind the annual event. Here are ten fun facts about Macy's Thanksgiving Day Parade that you probably didn't know:
1. Macy's employees staged the first parade in 1924 - it was so successful that they decided to make it an annual event.

2. The first character balloon to make an appearance at the parade was Felix the Cat in 1927.

3. In 1934 Macy's worked with Disney for the first time to create the original Mickey Mouse balloon.

4. The only interruption in the parade's history was from 1942-44. Macy's gave their parade balloons to the war effort since rubber was so scarce.

5. The parade was first televised in New York in 1945, and that same year the Macy's parade began using the route that is still followed today.

6. There was a helium shortage in 1958 that forced the balloons to be filled with air and hung from cranes instead of the traditional floating and bobbing.

7. Floats must travel through the Lincoln Tunnel to get to Manhattan for the parade. A 24 foot wide, 40 foot high float has to fold up to an 8 foot wide and 12 1/2 food high float in order to get through. Wow!

8. Balloons go through rigorous testing with engineers to ensure they are aerodynamic and with the character's creators to make certain they adhere to the character's likeness and personality.

9. Nine parade telecasts since 1979 have been given the Emmy for outstanding achivement.

10. Last year the parade attracted 2.5 million spectators along the parade route and over 44 million television viewers, making it by far the most widely viewed parade around.
Source: voices.yahoo.com