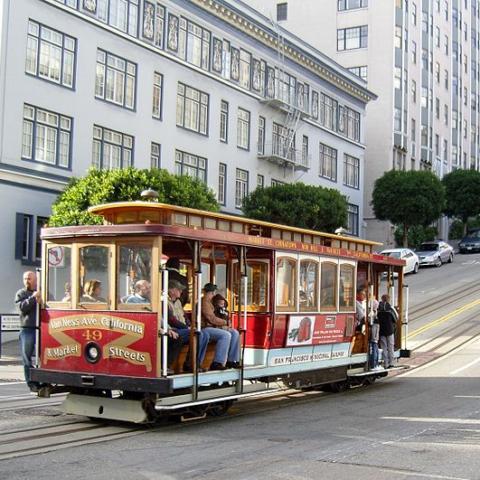 San Francisco's famed cable cars are among the city's most popular attractions. Even though it may look like they were especially made for tourists, the cable cars were actually created out of a necessity.
Anyone who has walked on the streets of San Francisco will know that many of the slopes on the city's hills are so steep that an ordinary tram would never be able to drive up the hills.

The history of San Francisco's cable cars goes back to 1869, when Andrew Smith Hallidie, the owner of a wire-rope factory, saw a horse-drawn streetcar slide backwards under its heavy load, causing the death of five horses. This accident, together with his experience of the use of wire-rope for pulling cars in mines, brought Andrew Hallidie to build the first cable car in San Francisco. It took until 1873 before the first cabled streetcar started operations.
The system was used in several other cities, but most switched to electric streetcars, which became practical in the late 19th century.

- Decline
Several lines started operations in the late 19th and early 20th century. At its height during the early 20th century there were about 600 cars driving around the city at the same time.
The decline of the cable cars started after the 1906 earthquake, when many cable cars were replaced by electric streetcars. In the 1940s, several lines were replaced by buses. And in 1947 mayor Roger Lapham even tried to close the cable car system, but a committee set up to save the cable car system campaigned successfully to keep the cars in operation. In 1954 though, several lines were abolished, leading to the current three lines. Between 1982 and 1984, the cable car system, which was in a deplorable state, was rebuilt and the cars were renovated.

- Operating Lines
The three current operating lines are Powell-Mason, Powell-Hyde and California lines. The first two start at a turntable at Market & Powell street and the last one starts at Market & Drumm Street.
The Powell-Mason line runs over Nob Hill, Russian Hill and ends at Aquatic Park.
The Powell-Hyde line runs over Nob Hill to Fisherman's Wharf.
The California Street line runs from the Financial district overChinatown, Nob Hill to the Van Ness Avenue.

- Cable Car Museum
The Cable Car Museum is housed in the Cable Car Barn which is also an active depot for the system. Here you can see the mechanism of engines, cables, gears and brakes that pull the cable cars.
In fact the cars don't even have any drive mechanism themselves but they are pulled by cables that rotate at a constant speed. With a grip the tram is locked to the cable. To stop the car the grip is released and at the same time brakes are manually activated.
The cables are 1,25 inch / 3cm wide and several kilometers long. Since they are under constant strain the cables have to be replaced at least once a year.
Source: ehow.com