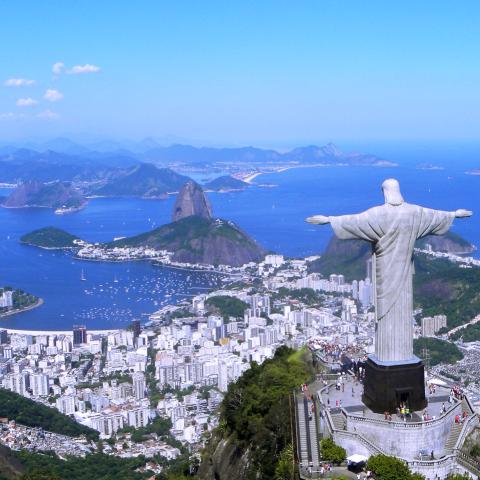 1. Aurora - United States. Natural colored light displays in the sky, usually observed in the polar zone at night. Often it appears as a greenish glow rising from an unusual direction extending in east-west.

2. Grand Canyon - United States. It is a steep-sided gorge carved over millennia through the rocks of the Colorado Plateau. Take time to enjoy its beauty and size, to sit and to watch the changing play of light and shadows over its vast spaces.

3. Harbour of Rio de Janeiro - Brazil. It is a natural beauty surrounded by the city of Rio and formed by the Atlantic Ocean which wore out the soil and rocks along the coast.

4. Mount Everest - Nepal. It is part of the Himalaya range in High Asia and with its 8.848 meters is the highest mountain on earth. It also called Chomolungma, Qomolangma or Zhumulangma.

5. Par?cutin Volcano - Mexico. It is a cinder cone volcano which from its birth of eruption between 1943 and 1952, it represented a dramatic period in the lives of Par?cutin people, but like most cinder cones it will never erupt again.

6. The Great Barrier Reef - Australia. It is the largest Corals Reef of the world and is the only collective organism that can be seen from the orbit of the Earth.

7. Victoria Falls - Zambia. The Victoria Falls is one of the best spectacular natural wonders of the world, also called 'Mosi-oa-Tunya' constitutes the largest curtain of water in the world into the Zambezi Gorge with its 1708 meters wide.
Source: 7wonders.org