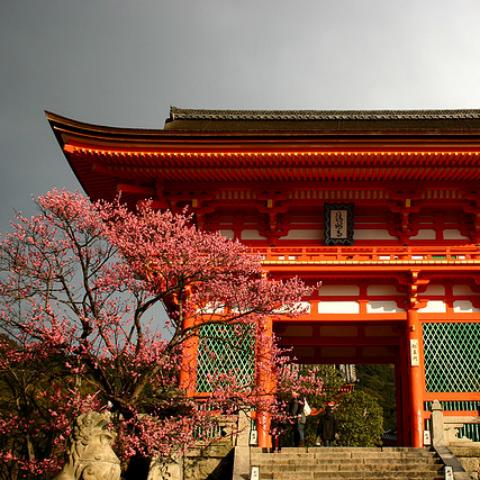 Kiyomizu-dera is one of the most famous temples in Kyoto and was built at the end of the 8th century. The main hall was constructed in the 17th century, and is famous for its location overhanging a cliff. The platform of the main hall, which is supported by 139 giant pillars, affords a spectacular view of the town of Kyoto. It is designated a National Treasure. The three-storied pagoda in the temple precinct, which was rebuilt during the 17th century, is designated by the national government as an Important Cultural Property. The expansive site, with an area of 130,000 sq m, contains many Important Cultural Properties, including buildings and Buddhist images. Along the ravine to the south of the main hall grow cherry and maple trees. This site is known for its cherry blossoms in the spring, and its red leaves during the fall.
Source: jnto.go.jp