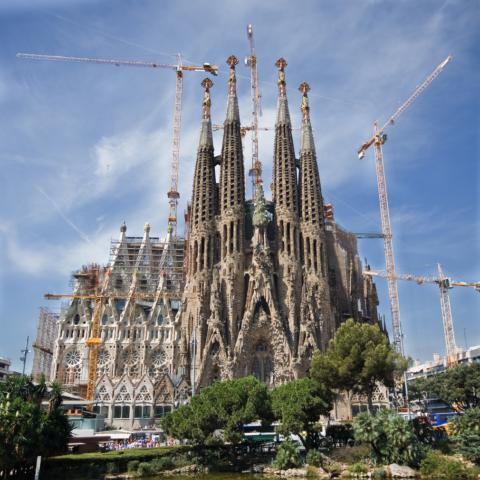 Barcelona is a great city and one of the main attractions is La Sagrada Familia. Below we look at 10 facts that you may not have not known about this attraction.

1. Construction of La Sagrada Familia began in 1882 and is still underway. It is expected to be completed in 2041. It was originally conceived by Catalan publisher Josep Bocabella symbolic of the revolutionary ideas becoming increasingly apparent in the city of Barcelona. Work began by public subscription with architect Francesc de Paula Villar's design-a traditional neo-Gothic style. When the two could not agree, Anton? Gaud? took over construction.

3. The Roman Catholic basilica will comprise 18 tall towers with the tallest reaching a height of 560 feet. It is projected to be 60 meters wide and 95 meters long.

4. Admission is granted for EUR8, while groups of 20 or more people, retired folks, students, and those under 18 get a reduced rate of EUR5. 'Friends of the Church', children below 12 years of age, and the disabled (as well as one companion) are granted free admission. Services, however, are charged separately, and all groups must book in advance. Services include lift charges, audio guides, and cloakroom services. Wheelchairs are available for disabled visitors. Visitors are not permitted to climb the towers; they must take the lift.

6. The cathedral's chief architect Gaud? died tragically in a tram accident. His death was mourned throughout the city, and he is now buried in the Sagrada Familia crypt.

7. Although the cathedral was not damaged during the Spanish Civil War, in 1936, Catalan anarchists destroyed numerous models and plans to rid the city of conservative religious icons.

8. Construction is currently underway under the guidance of Jordi Bonet i Armengol. Starting in the 1980s, computers were used for the design and construction process. This has made drastic improvements in speeding up the process.

9. A 180-meter tower topped by a lamb that represents Jesus was included in the original Gaud? design. This tower was to be enclosed by four shorter towers that represented the

10. Four Evangelists and would be topped with the animal symbols attributed to them. A fifth tower would represent the Virgin Mary. The towers' pinnacles will carry colourful mosaics and some will bear the words 'Excelsis' and 'Hosanna'. The three facades of the basilica-the Passion Fa?ade, Nativity Fa?ade, and the Glory Fa?ade-has three portals to represent faith, hope, and love.
Source: eyeonspain.com