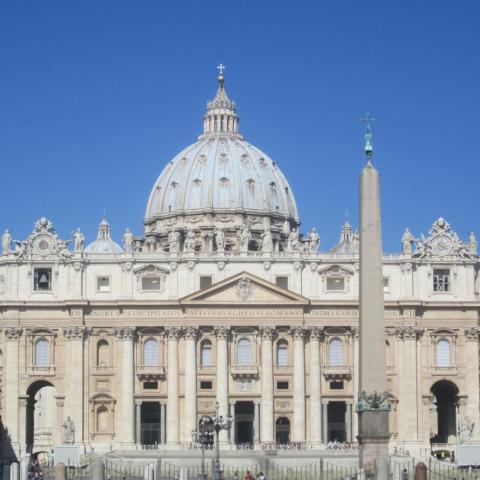 2. It was in the 15th century that Pope Nicolas V ordered the restoration and enlargement of the church built in 349 AD, as the basilica was falling into ruins. However, the work was halted after the death of Nicolas V.

3. The restoration process on the church again started in the 15th century. Construction on St Peter's Basilica began under Pope Julius II, in 1506 and was completed in 1615, under Pope Paul V.

4. Donato Bramante was to the first chief architect of St. Peter's Basilica. Many famous artists worked on the "Fabbrica di San Pietro", as the complex of building operations were officially called.

5. The Basilica of Saint Peter is officially known as the Basilica di San Pietro in Vaticano and is commonly known as St. Peter's Basilica.

6. St Peter's Cathedral is the greatest of all churches of Christendom and is one of the holiest sites in the world.

7. The Basilica of St. Peter is one of four major basilicas of Rome.

8. St. Peter's Basilicais the largest church in the world. It has a 218 meter long nave.

9. The dome of St. Peter's Cathedral was designed by Michelangelo and is the largest dome in the world, measuring 42m in diameter and reaching a height of about 138 meters.

10. St. Peter's Basilica is the burial site of Saint Peter. According to catholic tradition, he was one of the twelve apostles of Jesus. He was also the first Bishop of Antioch and first Bishop of Rome. Saint Peter, therefore, lies first in the line of the papal succession.

11. St. Peter's Cathedral is famous as a place of pilgrimage, for its liturgical functions as well as for its historical associations.

12. The Basilica of St. Peter is regarded as the greatest work of architecture of its time.

13. According to the Catholic tradition, Saint Peter's tomb is below the altar of the basilica.

14. The largest church in Christianity, St. Peter's Cathedral covers an area of 2.3 hectares and has a capacity of over 60,000 people.

15. Some of the most important works in the basilica are the Piet? - by Michelangelo, the Papal Altar - by Bernini, the Throne of St. Peter - also by Bernini, and the Monument to the Stuarts - by Canova.
Source: lifestyle.iloveindia.com