See the ALHAMBRA in Spain 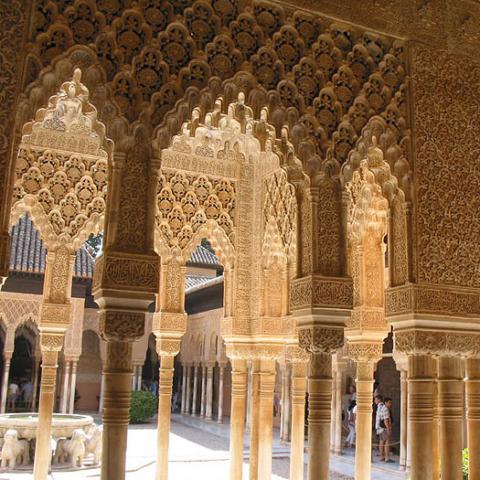 Alhambra is the name of a palace and fortress complex that forms one of the most popular tourist attractions of Spain. It is situated on hill al-Sabika, on the southeastern border of the city of Granada. It was constructed by the Nasrid rulers of Granada, in order to serve as a fortress for military purposes. Later, mainly with the arrival of Mohammed ben Al-Hamar, it was transformed into the royal residence. If you want to know some more fun and interesting facts about Alhambra, go through the lines below.

Fun and Interesting Facts about Alhambra
- The complete name of Alhambra is "Qal'at al-Hambra", which means "The Red Fortress".
- Alhambra is a palace and fortress complex situated on the southeastern border of the city of Granada, Spain.
- Alhambra is perched on top of hill al-Sabika, along the left bank of River Darro.
- The strategic location of Alhambra allows a view over the whole city as well as the meadow (la Vega).
- Constructed by the Nasrid rulers of Granada, Alhambra was initially intended to serve as a military fortress.
- It was with the arrival of the first king of the Nasrid dynasty - Mohammed ben Al-Hamar, in 13thcentury, that the royal residence was established in Alhambra.
- Watch Tower (Torre de la Vela) and the Keep (Torre del Homenaje) of Alhambra were built after the arrival of Mohammed ben Al-Hamar.
- Yusuf I (1333-1353) and Mohammed V (1353-1391) can be credited with building most of the impressive structures in Alhambra.
- The architecture of Alhambra, as it stands today, is a blend of Islamic (initial) as well as 16thcentury Christian (later additions) styles.
- Charles V, Holy Roman Emperor, got a Palace of Charles V erected within Alhambra, in 1527.
- The terrace or plateau that serves as the foundation of Alhambra measures about 740 m (2430 ft) in length and 205 m (674 ft) at its greatest width.
- The feature of Alhambra that is the most westerly one comprises of the Alcazaba (citadel); a strongly fortified position.
- The foundation plateau of Alhambra, apart from Alcazaba, comprises of a number of palaces, enclosed by a relatively weak fortified wall.
- Thirteen towers, some defensive and some providing vistas for the inhabitants form the other structures of Alhambra.
- Alhambra was completed towards the end of Muslim rule in Spain, by Yusuf I (1333-1353) and Muhammed V, Sultan of Granada (1353-1391).
- Though the buildings of Alhambra were initially whitewashed, they are now seen as reddish today.
- The first reference to the Alhambra is found during the battles between the Arabs and the Muladies, during the rule of ‘Abdullah ibn Muhammad (888-912).
- The complex of Alhambra stands surrounded by ramparts and has an asymmetrical shape.
- Alhambra has valley of the river Darro on its northern side, valley of al-Sabika on its southern side and street Cuesta del Rey Chico on its eastern side.
- The castle of Alhambra was added to the city's area, within the ramparts, in the 9th century.
- A part of Alhambra was blown up during French domination, but the repair and restoration was carried out as late as 19th century.
Source: lifestyle.iloveindia.com