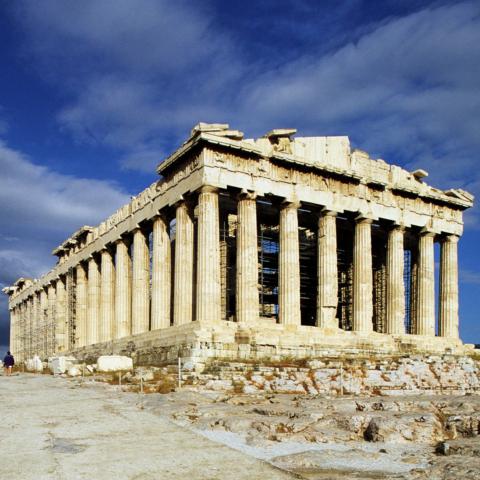 What is the Parthenon in Athens?
The Parthenon is the remains of a temple to the Greek goddess Athena, the patron goddess of the ancient City of Athens.

What kind of Greek temple is the Parthenon?
The Parthenon in Athens is considered to be the finest example of Doric-style construction.

What is Doric style?
Doric is a simple, unadorned style characterized by plainer columns. Find out

Who built the Parthenon in Athens?
The Parthenon was designed by Phidias, a famous sculptor, at the behest of Pericles, a Greek politician credited with the founding of the city of Athens and with stimulating the so-called "Golden Age of Greece". The Greek architects Ictinos and Callicrates supervised the practical work of the consturction. Alternate spellings for these names include Iktinos, Kallikrates, and Pheidias - there is no official transliteration of Greek into English.

What was in the Parthenon?
Many treasures would have been displayed in the building, but the glory of the Parthenon was the gigantic statue of Athena designed by Phidias and made out of chryselephantine (elephant ivory) and gold.

When was the Parthenon built?
Work on the building began in 447 BCE and continued until 438 BCE; some of the decorations were completed later. It was built over the site of an earlier temple which is sometimes called the Pre-Parthenon.

How big is the Parthenon?
Experts differ on this because of variations in the way it is measured, and due to damage to the structure. One common measurement is 111 feet by 228 feet, or 30.9 meters by 69.5 meters.

What does Parthenon mean? Why is it called the Parthenon?
The temple was sacred to two aspects of the Greek goddess Athena, Athena Polios ("of the city") and Athena Parthenos ("young maiden"). The "on" ending means "place of", so "Parthenon" means "Place of the Parthenos".

Why is the Parthenon in ruins?

The Parthenon survived the ravages of time pretty well, serving as a church and then a mosque, until finally it was used as a munitions depot during the Turkish Occupation of Greece. In 1687, during a battle with the Venetians, an explosion tore through the building and caused much of the damage seen today. There was also a damaging fire in ancient times.

What is the "Elgin Marbles" or "Parthenon Marbles" controversy?
Lord Elgin, an Englishman, claimed he received permission from the local Turkish authorities to remove whatever he wanted from the ruins of the Parthenon. But based on surviving documents, he apparently interpreted even that "permission" quite liberally. The Greek government has been demanding the return of the Parthenon Marbles and an entire vacant floor awaits them at the New Acropolis Museum. At present, they are displayed at the British Museum in London, England.

What is the Acropolis?
The Acropolis is the hill in Athens on which the Parthenon stands. "Acro" means "high" and "polis" means "city" - so it is literally the "high city". Many other places in Greece have "an" acropolis but "The Acropolis" usually refers to the site of the Parthenon in Athens.
In addition to the obvious classical monuments, there are much more ancient remains from the Mycenean period and even earlier. You can also see from a distance the sacred caves which once were used for rites to Dionysos and other Greek deities, though they are not generally open to the public. The New Acropolis Museum is located beside the rock of the Acropolis, and holds many of the finds from the Acropolis and Parthenon. It replaced the old museum which was located on top of the Acropolis itself.
Visiting the Acropolis and Parthenon
Many companies offer tours of the Parthenon and the Acropolis. You can also join a tour for a small fee in addition to your admission at the site itself, or just wander about on your own and read the curation cards, though the information they contain is relatively limited.
Source: gogreece.about.com