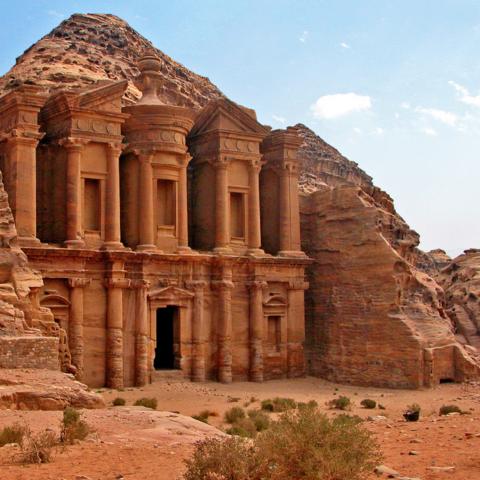 Petra Jordan – the ancient city and the capital of the Nabataean kingdom – is now an archaeological site and a symbol of Jordan, part of World Heritage UNESCO, one of the New 7 Wonders of the World.
Petra means “rock” in Greek, and that’s a good name for an ancient city. This city lies in a small desert valley completely surrounded by towering sandstone cliffs.Petra was the capital of an Arab people known as Nabataens around 6th century BC and was a center of the ancientcaravan trade. It was called Petra by the Greeks and Romans, but its real Arab name is still not known for sure. Petra eventually became a Romanoutpost and was later a stronghold of the Crusaders.
At its peak the city of Petra was home to some 20,000 Nabataeans who, in the midst of the desert, built an ingenious system ofwaterways to provide their city with the precious liquid.
Since the early 1800s, when it was “rediscovered,” clues to daily life in this “lost city of stone” are being unearthed and today we are beginning to see once again what Petra looked like 2,000 years ago.

Facts about petra jordan :
1. City was carved into the walls of desert canyon

2. The treasury its most famous structure, is estimated to be 2000 years ago .

3. Carvings on the treasury have been damaged by the Bedouin who used it for target practice

4. Salt blown in from the Dead Sea is crystallizing in the pores of the sandstone and slowly weakening the structures

5. The Great Earthquake describes the violent earthquake of A.D. 363 that wreaked considerable damage to Petra, from which the city never fully recovered, and features a timeline of earthquakes that occurred within a 400-kilometer (250 mile) radius of Petra from the first century B.C. to the eighth century A.D.

6. Arches The Byzantine Era explores the history of Petra in the fifth and sixth centuries A.D., when Petra became an important center of Christianity within the Byzantine realm. Highlights in this section include a sixth-century A.D. marble pulpit from a Byzantine church called the Blue Chapel, which was part of a building complex that evidently housed one of the city’s prominent citizens, and a sixth-century A.D. scroll fragment, written in cursive Greek, that is part of an extensive will of a wealthy man named Obodianus, dictated from his sickbed.

7. Petra consists of over 800 carved tombs

8. 80% of the original carvings are thought to be lost

9. Highlights in this section include the two halves of an important ancient Nabataean statue which have been reunited for the first time in more than 1,500 years.

11.Another very noticeable change is in the very center of the site, the hillsides lying on either side of the Roman Colonnaded Street which ran through the heart of Petra.  When I first saw them, these were simply hillsides.  Nowadays you’ll explore temples, the Cathedral, and the extensive Great Temple complex with its temples, garden and pool complex, Odeon and other intriguing features.

12. The Petra basin boasts over 800 individual monuments, including buildings, tombs, baths, funerary halls, temples, arched gateways, and colonnaded streets, that were mostly carved from the kaleidoscopic sandstone by the technical and artistic genius of its inhabitants.

13. Petra sights are at their best in early morning and late afternoon, when the sun warms the multicolored stones, you can view the majesty of Petra as it was seen first when discovered in 1812 after being lost by the 16th century for almost 300 years!

14. Petra was used as one of the sets of Indiana Jones.

15. Inside of the Treasury there are hidden coins.

17.The only access to Petra is though a 300 meter high canyon.

19.It is at Petra were King Aretas called for the arrest of the Apostle Paul at the time of his conversion.
Source: echomon.co.uk