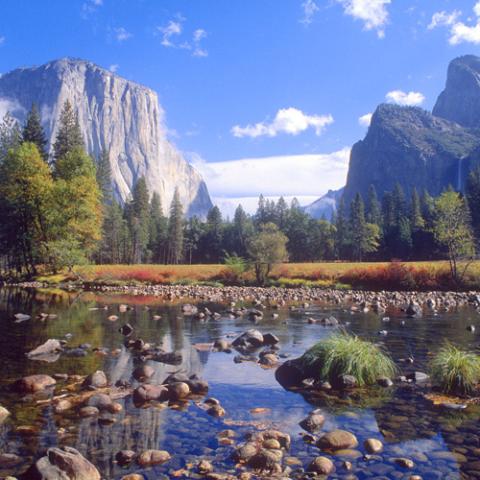 Each year, over 3.5 million people from around the globe come to northern California to Yosemite Valley, part of Yosemite National Park, to experience the grandeur and majesty of the towering sequoias, thundering waterfalls and impressive mountain peaks. The Valley, which sits on the western edge of the Sierra Nevada Mountains, has as its borders some of the world’s most famous mountains and rock formations.

Natural Attractions
The park's numerous waterfalls are a primary attraction. The Valley serves as the base for seven major waterfalls, including the famous Bridalveil Falls, Vernal Falls and Ribbon Falls. North America’s longest waterfall, Yosemite Falls, drops from 2,425 feet into the Valley. Both the Tuolumne and Merced rivers flow through the valley, and Yosemite Valley guests enjoy views of rock formations like Half Dome, El Capitan, Cathedral Rocks and Three Brothers. The valley also holds giant sequoia trees and four large meadow areas.

Wildlife
According to the park’s website, Yosemite Valley and surrounding mountains hold more than 400 species of vertebrates, as well as an abundant insect population, including two insects that scientists recently discovered and which researchers believe do not live anywhere else. Park guests regularly spot deer, coyotes and bears while visiting Yosemite Valley. Visitors must keep any food they bring out of sight because of the bears, and campsites are equipped with food lockers for this purpose.

Camping
Yosemite Valley has four campgrounds: Upper Pines, Lower Pines, North Pines and Camp 4. Lower Pines and North Pines accept RVs up to 40 feet in length and trailers up to 35 feet in length. Upper Pines accepts RVs up to 35 feet and trailers up to 24 feet. Camp 4 offers its 35 tent sites on a first-come-first-served basis, but the other three campgrounds require reservations.

Hiking
According to Yosemite Hikes, Yosemite Valley has 12 hiking trails that originate somewhere in the valley. Each hike takes guests to popular scenic attractions, like Bridalveil Falls, Mirror Lake and Inspiration Point. The longest is the hike to Half Dome, which is 14 miles long and takes hikers to a 4,800-foot elevation. The hikes to Upper and Lower Yosemite Falls all rate high for scenery. Of the two, the longer Upper Yosemite Falls hike is less crowded.

Lodging
Guests who do not wish to camp can book lodging at one of the Valley’s four accommodation options. The Ahwahnee Hotel and Yosemite Lodge offer traditional hotel rooms, with the Ahwahnee Hotel being the more luxurious of the two. In addition to 99 luxury hotel rooms, the Ahwahnee Hotel has 24 cottages on the grounds. Yosemite Lodge sits across from the Lower Yosemite Falls trailhead, offering the guests in its 249 rooms excellent views. Curry Village offers cabins and tent cabins for guests, and the Housekeeping Camp has tent-like cabins that accommodate up to six people.

Amenities
Yosemite Valley holds Yosemite Village, the park’s primary retail location, which has a grocery store, restaurants and restroom facilities. The Valley also has a smaller shopping center, Curry Village, which has restaurants, a small store and showers. Both villages have Internet access available for a fee.
Source: yosemitelodging.com