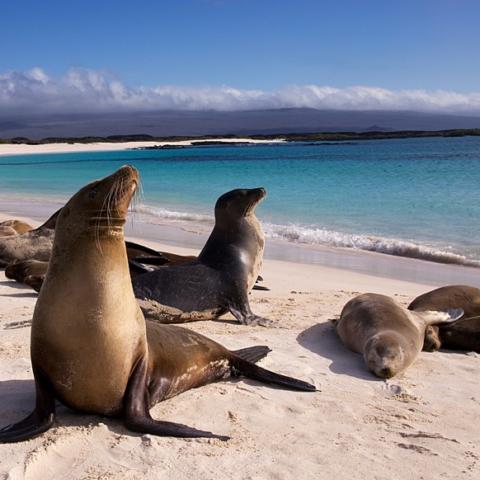 Situated in the Pacific some 1,000 km from the South American continent, these islands and the surrounding marine reserve have been called a unique 'living museum and showcase of evolution'. Located at the confluence of three ocean currents, the Gal?pagos are a 'melting pot' of marine species. Ongoing seismic and volcanic activity reflect the processes that formed the islands. These processes, together with the extreme isolation of the islands, led to the development of unusual animal life such as the land iguana, the giant tortoise and the many species of finch that inspired Charles Darwin's theory of evolution following his visit in 1835.

The site is situated on the Gal?pagos Submarine Platform, and consists of about 120 islands. The larger islands are Isabela, Santa Cruz, Fernandina, Santiago and San Cristobal. The islands were formed by volcanic processes and most represent the summit of a volcano, some of which rise over 3,000 m from the Pacific floor. The western part of the archipelago experiences intense volcanic and seismic activity. The larger islands typically comprise one or more gently sloping shield volcano, culminating in collapsed craters or calderas. Long stretches of shoreline are only slightly eroded, but in many places faulting and marine erosion have produced steep cliffs and lava, coral or shell sand beaches. Other noteworthy landscape features include crater lakes, fumaroles, lava tubes, sulphur fields and a great variety of lava and other ejects such as pumice, ash and tuff.

The marine environments are highly varied and are associated with water temperature regimes reflecting differences in nutrient and light levels. These range from warm temperate conditions brought on by vigorous upwelling (Equatorial Undercurrent) and a moderately cool, warm temperate-subtropical influence (Peru Flow).
There is considerable variation in altitude, area and orientation between the islands which when combined with their physical separation, has contributed towards the species diversity and endemism on particular islands. Coastal vegetation occurs along beaches, salt-water lagoons and low, broken, boulder-strewn shores. Protected coves and lagoons are dominated by mangrove swamps. The arid zone is found immediately inland from the coastal zone, and is the most widespread formation in the islands. The humid zone emerges above the arid zone through a transition belt in which elements of the two are combined. It is a very damp zone maintained in the dry season by thick, garua fogs which accumulate through most of the night and last well into each day. A fern-grass-sedge zone covers the summit areas of the larger islands where moisture is retained in temporary pools.