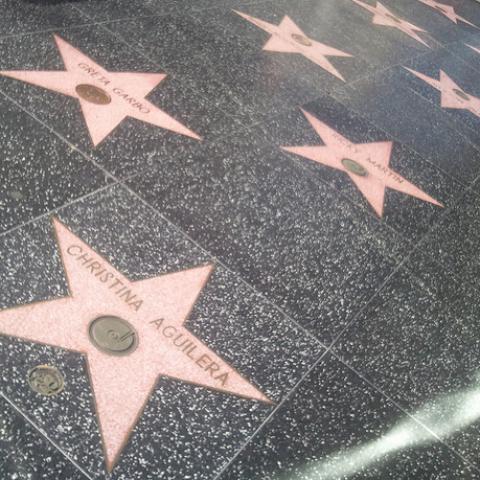 The Walk of Fame began as a beautification project for the city of Hollywood in 1958. It was created by artist, Oliver Weismuller as a tribute to honor celebrities in the fields of motion pictures, television, radio, theater and music. The Walk of Fame originated with 2,500 blank stars made of pink and charcoal terrazzo. As stars were inducted into the Walk of Fame, the blank stars are removed and replaced with a star bearing the celebrities name and area of show business. The stars run down Hollywood Boulevard between Gower Street and LaBrea Avenue. They also run up Vine Street between Sunset Boulevard and Yucca Street.
Symbols on the Stars
Each star has a different brass symbol representing the category in which the celebrity received his or her star.

1. Movie Camera - for contributions to the motion picture industry

2. Record - for contributions to the recording industry

3. Microphone - for contributions to the radio broadcast industry

Sponsors of the nominees must fill out a very simple nomination form listing the nominee's qualifications for inclusion in the Walk of Fame. The committee receives a few hundred nominations a year and out of these typically chooses a couple dozen inductees. Once the Walk of Fame Committee has selected a nominee, the celebrity must be approved by the Board of Directors for the Hollywood Chamber of Commerce, the Los Angeles City Board of Public Works and finally the Los Angeles City Council.
The induction ceremony is presided over by honorary Hollywood mayor, Johnny Grant, and is open to the public.
Source: voices.yahoo.com