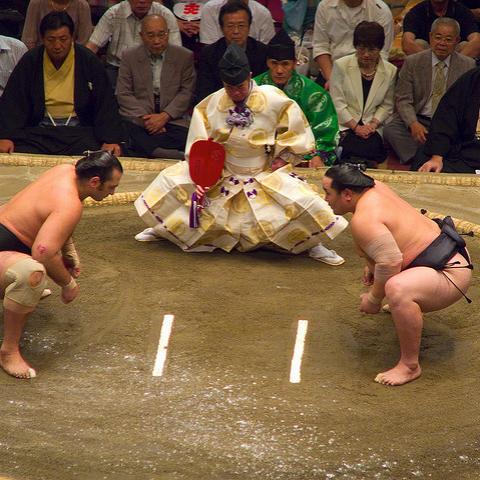 11 Things You Might Not Know About Sumo
The world of Sumo is a little mysterious even to the Japanese. Here's a few things you might not know.

1. Sumo wrestlers used to be skinny.
As with many professional sports, Sumo athletes have become larger with time. In the case of Sumo they have also become fatter.
Today, there are no weight divisions in professional sumo. The weight of top wrestlers varies a great deal. It's common for one wrestler to be twice the weight of another.

2. Gaijin can sumo.
Many of the top contenders in Sumo are recruited from abroad.
At one time there was no restriction on the number of foreign Sumo wrestlers in professional sumo. In 1992, one Sumo stable recruited 6 Mongolians at the same time sending the league into a (gaijin) panic. The Sumo Association announced it was considering limiting the numbers of foreigners per stable. The stables responded with a 6 year self-imposed moratorium on recruiting foreigners.
Today, the Sumo Association strictly limits the number of foreign wrestlers (defined as born outside Japan) to one per stable. Despite this, there are still 15-20 foreigners in the two top divisions at any one time.
There's an unspoken rule that foreigner wrestlers must speak Japanese and be well versed in Japanese culture.

3. Sumo wrestlers dance.
The ring entering ritual of sumo often resembles a dance.
When entering the ring the wrestler claps his hands and performs a leg-stomping ritual to drive evil spirits from the ring. This is often rhythmic and stylized.
Wrestlers face each other and clap their hands again. They spread their arms wide to prove they have no weapons.

4. No one under 50 is interested in sumo.
Interest in sumo has been in decline (for a long time). Young generations of Japanese are more interested in soccer and baseball. The average age of spectators at a professional sumo match is well over 50.

5. Yakuza like sumo.
The Yakuza like to keep a low profile and rarely show up on television. An exception was made in 2010 when the Yamaguchi-gumi (the largest yakuza group) purchased a block of 50 prominent seats at a nationally televised Sumo match. Needless to say, they stuck out in the crowd. Rumor has it they did it to cheer up their incarcerated boss who was watching the match from jail.
The Sumo Association has experienced numerous Sumo match fixing and gambling incidents in recent years tied to the Japanese underworld.

6. There's a tradition of female sumo in Japan.
The Sumo Association doesn't allow women to enter a sumo ring (it's considered a violation of the purity of the ring). For example, the Governor of Osaka normally enters the ring to award the Governor's Prize at the annual Osaka Sumo Tournament. However, when Osaka elected a female governor (Fusae Ohta) she wasn't allowed to enter.
Historically, there was a tradition of female sumo at some Shinto shrines. This is downplayed by professional sumo.

7. Sumo wrestlers must live a traditional lifestyle.
Sumo wrestlers are required to live in sumo training stables. They must dress in traditional Japanese clothing at all times. Every aspect of their life is dictated by strict rules.

8. Sumo originated at Shinto shrines.
Sumo originated in Shinto religious rituals whereby a human would wrestle with a kami (a Shinto divine spirit). There are still sumo rings on the grounds of many shrines in Japan.
Shinto ritual guides every aspect of sumo. Shinto referees (gyoji) essentially act as priests in the ring. For example they perform purification rituals to rid the ring of evil spirits before a match.
The wrestlers themselves throw salt into the ring before each match to purity it.

9. Fans express their disappointment by throwing cushions.
Sumo fans sit on thin Japanese cushions. When they're disappointed by a ruling or outcome they throw them into the ring.

11. Kappa can sumo wrestle.
Kappa are terrible (mythical) Japanese river monsters. Kappa often challenge humans to sumo wrestle. Since they're small they usually challenge children.
One way to escape from a kappa monster is to challenge him to a sumo match. If you win he'll let you go. Kappa always keep their word.
Source: japan-talk.com