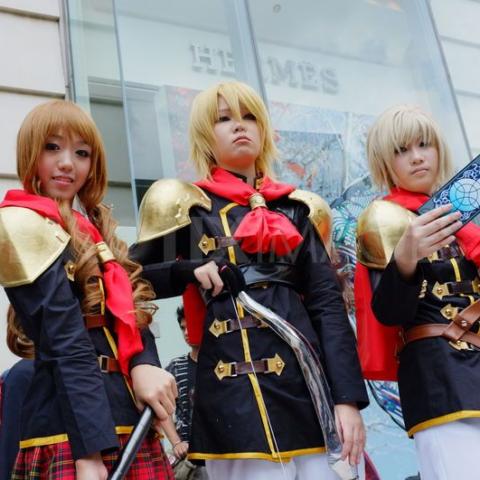 Cosplay, short for "costume play", is a type of performance art in which participants wear costumes and accessories to represent a specific character or idea from a work of fiction. Cosplayers often interact to create a subculture centered on role play.
Favorite sources include manga, anime, comic books, video games, and films. Any entity from the real or virtual world that lends itself to dramatic interpretation may be taken up as a subject. Inanimate objects are given anthropomorphic forms and it is not unusual to see genders switched, with women playing male roles and vice versa. There is also a subset of cosplay culture centered on sex appeal, with cosplayers specifically choosing characters that are known for their attractiveness and/or revealing costumes.

The Internet has enabled many cosplayers to create social networks and websites centered around cosplay activities, while forums allow cosplayers to share stories, photographs, news, and general information. The rapid growth in the number of people cosplaying as a hobby since 1990 has made the phenomenon a significant aspect of popular culture. This is particularly the case in Asia, where cosplay influences Japanese street fashion.

Cosplay costumes vary greatly and can range from simple themed clothing to highly detailed outfits. Cosplay is generally considered different from Halloween and Mardi Gras costume wear, as the intention is to accurately replicate a specific character, rather than to reflect the culture and symbolism of a holiday event. As such, when in costume, cosplayers will often seek to adopt the affect, mannerisms and body language of the characters they portray (with "out of character" breaks). The characters chosen to be cosplayed may be sourced from any movies, TV series, books, comic books, video games or music bands, but the practice of cosplay is often associated with replicating anime and manga characters.

Most cosplayers create their own outfits, referencing images of the characters in the process. In the creation of the outfits, much time is given to detail and qualities, thus the skill of a cosplayer may be measured by how difficult the details of the outfit are and how well they have been replicated. Because of the difficulty of replicating some details and materials, cosplayers often educate themselves in crafting specialties such as textiles,sculpture, face paint, fiberglass, fashion design, woodworking and other uses of materials in the effort to render the look and texture of a costume accurately.

Almost all cosplayers wear wigs in conjunction with their outfit in order to further improve the resemblance to the character. This is especially necessary for anime and manga characters who often have unnaturally coloured and uniquely styled hair. Simpler outfits may be compensated for their lack of complexity by paying attention to material choice, and overall excellent quality. The process of creation may then be very long and time-consuming, making it a very personal journey and achievement for many. This taxing and often expensive process is known to unite cosplayers and is considered a part of the culture of cosplay.
Source: wikipedia.org