Have a SNOWBALL FIGHT 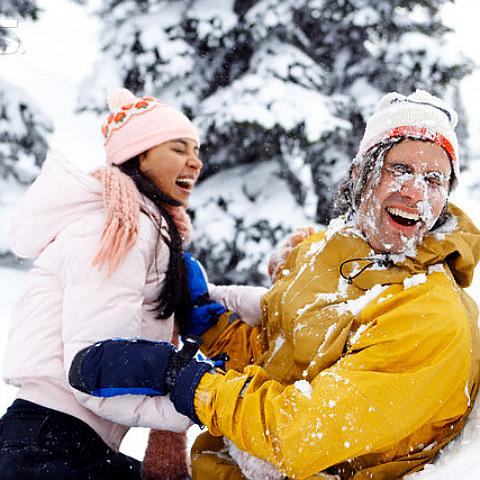 Snow has long proven to be like an addictive drug to many of us. We’re essentially ‘snow users.’ We spend lots of money to acquire it, we travel long distances to be with it, we shamelessly indulge in it, and many of us are clearly addicted to it. Given all the snow attributes we share, we should know a little bit more about the stuff.

The world’s largest snowflake was reported to be 15 inches across and 8 inches thick. The Guinness Book of World Records states that this giant snowflake was found at Fort Keogh, Montana on January 28, 1887.

Snow is actually clear and colorless.

“The complex structure of snow crystals results in countless tiny surfaces from which visible light is efficiently reflected. What little sunlight is absorbed by snow is absorbed uniformly over the wavelengths of visible light thus giving snow its white appearance.” – National Snow and Ice Data Center

80% of all the freshwater on earth is frozen as ice or snow. This accounts for 12% of the earth’s surface.

A blizzard occurs when you can’t see for 1/4 mile. The winds are always 35 miles an hour or more. The storm must last at least 3 hours to be classed as a blizzard. If any of these conditions are less, it is only a snowstorm.

“In fact, the Eskimo–Aleut languages have about the same number of distinct word roots referring to snow as English does, but the structure of these languages tends to allow more variety as to how those roots can be modified in forming a single word” – wikipedia

All snowflakes have 6 sides. Period. The reasoning behind this gets techy, but it’s cool:
“The oxygen atom has a particularly strong attraction to the electron clouds of the two hydrogen atoms and pulls them closer. This leaves the two hydrogen ends more positively charged, and the center of the “V” more negatively charged. When other water molecules “brush up” against this growing snowflake, strong forces between the negatively charged and positively charged parts of different particles cause them to join together in a very specific three-dimensional pattern with a six-sided symmetry. Each water molecule that joins the snowflake reflects this pattern until eventually we can see its macroscopic six-sided shape.” – Learner.org