CANOE through the AMAZON 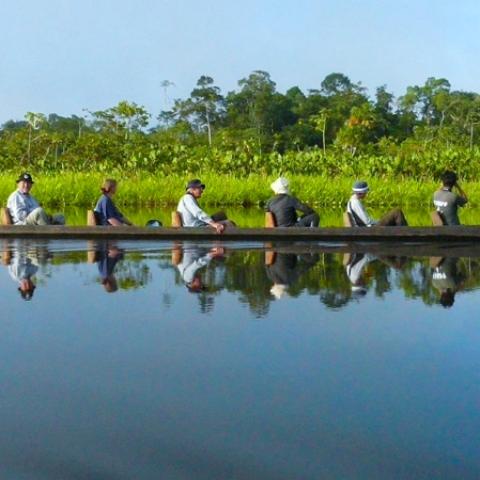 The Amazon is a 4,400-mile river with thousands of tributaries. It is a 2,600,000-square mile basin, draining rivers and streams in eight countries (Brazil, Bolivia, Peru, Ecuador, Colombia, Venezuela, Guyana and Suriname), as well as French Guiana. Its broadleaved forest is the largest on the planet and its biome – the forest combined with the savannah, floodplains and rivers – is a region of immense diversity, sheltering more than 30,000 plant species, 1,800 fish, 1,300 bird species, 311 mammals and 165 types of amphibian.

The superlatives state the facts, but the Amazon is clearly not a straightforward destination. For one thing, the main Amazon river flows through Brazil, Colombia and Peru, changing character as it changes its name; it’s Amazonas in Spanish and Portuguese, but the upriver section in Brazil is called the Solim?es and after it passes the tributary of Uy acali in Peru, it is known as the Mara??n. All other rivers are tributaries. These three countries, along with Ecuador, where the Pastaza, Putumayo, Napo and Tigre drain into the Amazon, are the most obvious choices for a holiday, but all present different kinds of experiences and their own logistical challenges.

Brazil offers, arguably, the archetypal Amazon trip – a cruise from Bel?m on the Atlantic to Manaus or up to the Colombian border – but the interest here is more human or anthropological. You’ll doubtless dance samba on deck at sunset, but you won’t see many toucans.

Peru, Ecuador and, to a lesser extent, Colombia are notable for their wildlife. Where deforestation and industrialisation have devastated great expanses of the low-lying Brazilian Amazon, the headwaters are in better shape. For birders and lepidopterists, the banks of the tributaries and the forested slopes of the Andes provide plenty of entertainment. For those who want more specialist wildlife, tour companies take groups in search of spectacled bears, jaguars and rare monkeys.
Wherever you go, you will want to get away from the widest sections of the river. In fast tributaries, whitewater rafting and kayaking are options, but it is in the slower watercourses that wonders await. Small, quiet groups can be paddled or punted into channels to see capybara on the banks and capuchin monkeys in the canopy and, come nightfall, caiman, snakes and tree frogs.
In the rainy season, when the floodplains fill, the submerged forests feel enchanted, and with just the plop of an oar, the call of a hoatzin bird and the green magnificence of the jungle for company, so will you.

1. When to travel
Given such a vast area, it is impossible to talk of a single weather system or neatly defined seasons. In the broadest terms, the rainy season in the Amazon is November or December to June (though Ecuador has a dry season between January and March). The river rises and floods the low-lying forests (called v?rzeas in Brazil) that lie along the banks, after which many channels become passable.
The dry – or drier – season, runs from July to December. As the temperature rises the mosquito numbers go down, and the receding rains expose trails and beaches. This can be good for hiking and fishing and for sightings of caiman as they compete for dwindling food sources.

2. How to travel
There are hundreds of ways into the Amazon. Independent travel is possible and may suit those with weeks to spare, but it comes with complications. You can fly into Bel?m and book onto a local boat and then arrange flights or epic bus journeys on from Manaus, or head directly for Iquitos or Leticia with only flights. You can also email the lodges in major parks such as the Tambopata, Man? or Yasun? reserves and the smarter boat operators (Delfin, Amazon Clipper, Manatee Amazon Explorer) directly and they will advise on logistics.
But you also need local operators for transfers and – because the best trips tend to be in remote areas – food, drink, water, boats and local guides (who may speak only Spanish or even an indigenous language, meaning a second guide).

Sudden, torrential showers are daily occurrences across the Amazon, and flights are often delayed, and connections easily missed. In short, if you have limited time and want to go deep into the jungle or explore the backwaters, you’re probably best organising your trip beforehand.
The first question to ask is: land or water? Almost all visitors take to the river at some point but there’s a huge difference between a four-day cruise and a three-hour transfer by motorised dugout. The second is: luxury or budget? The former will cut you off from local culture, but the latter may mean basic loos, windowless chalets and warm beer with dinner. A good ecolodge is often the best compromise and specialist tour operators will have surveyed the options and visited many of them.

3. Tactics by country
Brazil
Over the past two decades, the Pantanal wetlands in southern Brazil have replaced the Amazon as the wildlife destination par excellence. The country’s vast Amazonian region, however, is still a popular choice for long voyages, whether on a cruise ship or a traditional riverboat.
Holland America, Princess, P?&?O and Silversea, among others, offer cruises that start in Brazil, Europe or the United States. But for the budget-conscious and anyone who wants to meet ordinary people, riverboats carrying passengers in hammocks (with a few air-conditioned cabins) depart every day from Bel?m to Manaus (stopping at Parintins, Santar?m, and Monte Alegre), with connections on to Iquitos in Peru.
Once upstream, the most popular options for wildlife watching are a cruise on small, smart riverboats from Manaus up the Rio Negro or to head farther upriver to Tef? to stay at the lovely Uakari floating lodge.
Brazilian highlights include the Manaus Opera House, pink dolphins, piranha fishing, the Rio Negro’s anavilhanas (freshwater archipelago), caiman-spotting at night, Victoria amazonica waterlilies, flooded forests, pink-faced uakari monkeys and tarantulas.
Peru
The city of Iquitos (pictured below) – still not connected by road to most of Peru – remains the major hub for excursions into the Peruvian Amazon proper. From here visitors can either go by boat up to the Pacaya Samiria National Reserve, Peru’s largest, or take the Nanay river to the Allpahuayo Mishana National Reserve. lt is also possible to link up with Manaus on a local riverboat or, at the other extreme, on the luxurious SeaDream yacht.

In the last decade the Man? National Park, accessed via road from Cusco, and the Tambopata reserve near Puerto Maldonado, have become increasingly popular. They are part of the Madre de Dios river system and as well as great wildlife, ever-improving lodges and some intrepid options for kayaking, both are easy to combine with a Machu Picchu trip. Peru has a third Amazon region around Chachapoyas where the emphasis is on fine indigenous ruins (at Kuelap) and mummies (Leymebamba).
Peruvian highlights are Iquitos and its Casa de Fierro by Eiffel, strangling fig trees, canoeing in Lago Sandoval, river otter, cock of the rock, macaw and the parrot clay lick of Tambopata.

Ecuador
The headwaters of the Amazon in Ecuador are widely recognised as the site of some of the greatest biodiversity on Earth. The government is still contemplating exploiting the oil reserves in the Yasun? region but, for now at least, tourism provides a counterweight to the economic pressures.
Indigenous tribes such as the Huaorani and the Shuar and the more integrated Quechua communities accommodate visitors at basic lodges along the banks of several tributaries. Lodges are often isolated and getting to one may involve a flight – while boat trips are special, a small plane offers the best vantage point for seeing the full grandeur of the canopy.
Highlights include the indigenous tribes, ceibo trees, Huaorani Ecolodge and campsite, hummingbirds, blue morpho butterflies, the Yasun? Biosphere Reserve.

Colombia
Wildlife tourism is in its infancy in Colombia, but the Parque Nacional Amacayacu, accessed via Leticia, has – during the rain season – flooded forests to rival any in Brazil and lower visitor numbers mean spottings of monkeys, river dolphins and the 468 bird species that live there are more likely. Visit parquesnacionales.gov.co for information (in Spanish only).
Where dozens of tour operators offer trips to the other Amazon countries, with Colombia you’re best talking to a specialist such as Quartz Travel or Colombia Holidays/Verdant Adventures or intrepid companies such as Travel the Unknown or World Odyssey.
Source: telegraph.co.uk