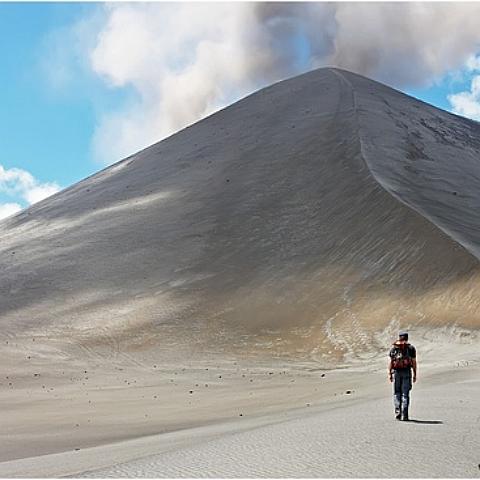 The Top 10 Most Magnificent Volcanoes to Visit
When we think of planning our next vacation, volcanoes don’t normally come to mind. Volcanoes, after all, are dangerous and unpredictable natural wonders. At the same time, their power and the long lasting impact they have on the landscape and environment are just as intriguing. These 10 volcanoes are some of the most magnificent in the world – add them all to your list of places to visit in your lifetime!

1. MOUNT VESUVIUS
Mount Vesuvius is located just east of Naples, Italy. It’s first known eruption was in 79 A.D. when it buried the city of Pompeii. The volcano is considered to be active because it has erupted within the last 100 years, the last of which was in 1944. The eruption in 79 is incredibly well known because the ash that fell on the city of Pompeii helped to preserve everything it covered. The historic dig site is certainly worth visiting.

2. MOUNT FUJI
Mount Fuji is known for being the highest mountain in Japan and is currently listed as a dormant volcano. The last eruption was in 1708 and the ash from that tragedy completely covered the city of Japan. Mount Fuji is an incredibly popular tourist attraction. While it is open to visitors year round, the tourist sites are only open in July and August, making those months a safer time to visit and explore this marvelous mountain. Because its only open to tourists two months of the year, make sure to book your Mt. Fuji hotel in advance.

3. SHISHALDIN VOLCANO
The Shishaldin Volcano is located on the Unimak Island in Alaska. The shape of the volcano is similar to the cone shape of Mount Fuji, but this volcano is unique because it has several small cones erupting from different areas of the slope as well. Shishaldin is considered a moderately active volcano, first erupting in 1775 with over 25 eruptions between then and the latest in 1999. This volcano is constantly monitored because there have been a number of very small volcanic earthquakes ever since the last eruption. The belly of this volcano is still grumbling!

4. POPOCATEPETL
Popocatepetl is the second highest mountain peak in Mexico and is considered to be an active volcano. The name loosely translates to “smoking mountain” and the volcano has had more than 20 known eruptions since 1519. The last major eruption was in the year 2000. Thankfully, scientists were able to warn the Mexican government and had thousands of people evacuated from the area. The eruption in December of that year was the largest documented, most likely in thousands of years.

5. PACAYA
Pacaya is located south of Guatemala City and is considered an active and complex volcano. The volcano is believed to have first erupted over 23,000 years ago and is documented to have had eruptions over two dozen times since the Spanish conquest. The last major eruption was in 1965 and the volcano has been in a constant state of eruption ever since, though most of the activity is very small. Tourism declined after violence in the 1990?s but the government worked hard to clean up the area and Pacaya is now a safer place for tourists to visit.

6. MOUNT PELEE
Mount Pelee is located in St. Pierre on the island of Martinique in the Caribbean. This one is considered a stratovolcano, comprised of layers of hardened ash and lava. The volcano explodes violently but often the lava hardens before traveling very far. The worst eruption of Mount Pelee came in 1902, when it killed upwards of 36,000 individuals and completely destroyed the city of St. Pierre, which was later rebuilt.

7. MOUNT SAKURAJIMA
Located in Kagoshima, Japan, Mount Sakurajima is one of the most active volcanoes in the world. The volcano erupts between one and two hundred times each year. A major eruption in 1914 resulted in enough volcanic ash to connect the island to the Osumi Peninsula; so, technically, Kagoshima is no longer its own island. There is so much activity that scientists have to be very careful in monitoring for what they believe might be a serious eruption as opposed to the smaller, regular occurrences. The city conducts regular evacuation drills and has constructed shelters designed to protect people from falling debris.

8. SOUFRIERE HILLS
The Soufriere Hills volcano is considered an active volcano. It had been dormant for many years but scientists detected activity again in 1995 and it has remained in a state of eruption ever since. One of the largest recent eruptions occurred in 1997, killing almost 20 people and completely destroying the island’s airport. The city of Monseratt, where the volcano is located, is now home to only 4,000 people, although the population and tourism are continuously growning.

9. MOUNT BROMO
Mount Bromo, located in East Java, Indonesia, is considered an active volcano. Far from the highest peak in the area, it is one of the most well known in the Tengger massif. Legend has it that the Princess Roro Anteng was required by the gods to sacrifice her last child (her 25th) to the volcano. After throwing the child in, the child ordered the people to have an annual ceremony honoring the volcano. The ceremony is still held each and every year.

10. KILAUEA
Kilauea is located on The Big Island of Hawaii and is one of the largest volcanoes in the world in width. The volcano has been actively erupting since the early 1980?s and is an excellent destination for visitors who want to see lava actively pouring from a volcano. It seems scary, but this is one of the safest active volcanoes you’re ever going to see.
Volcanoes, especially those that are still active, are some of the most amazing natural wonders in the world. If you have the opportunity to see one, it will be an experience you never forget.
Source: ratestogo.com