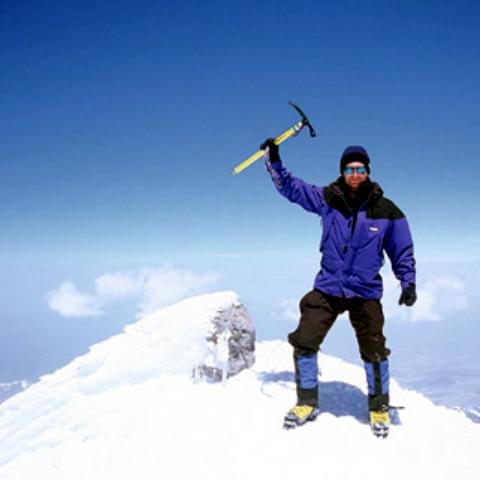 - Mount Elbrus lies on the geographical dividing line between Europe and Asia, but most geographers consider it to be the highest mountain in Europe. Mount Elbrus and the Caucasus Range also divide Russia from the Middle East to the south. Mount Elbrus lies near the Georgia border.

- The name of Mount Elbrus is derived from Alborz, which in turn comes from Har? B?r?zait?, a mountain in Persian mythology. This translates to "High Sentinel." Elbrus also has other names in other languages including Mingi Tau which translates to “Eternal Mountain” or “Like a Thousand Mountains” in Turkic; Yalbuz or “Ice Mane” in Turkic; and Oshkhamakhuaor “Mountain of Happiness” in Circassian.

- Mount Elbrus is perpetually snow-covered with an icecap and 22 glaciers. Three major rivers—Baksan, Malka, and Kuban—arise from the glaciers.

- Mount Elbrus is considered an inactive volcano. Lava flows cover the mountain as well as 100 square miles of volcanic ash and debris. Pyroclastic flows of ash and mud, indicative of a powerful eruption that melted ice, also drain off the mountain. An 800-foot-wide snow-filled volcanic crater is on the mountain’s western summit. Elbrus last erupted around 50 A.D.

- Mount Elbrus figures in Greek mythology. Zeus chained Prometheus, one of the four sons of the Titan Iapetos, to the mountain after he stole fire from Zeus and gave it to mankind. After Zeus imprisoned Prometheus, he sent a long-winged eagle to consume his liver but Herakles killed the eagle and freed Prometheus, the archetypal trickster, the bringer of fire, and a champion against oppression.

- The mountain’s easy accessibility and gentle slopes attract many climbers. In 1956, when Elbrus was in the Soviet Union, a group of 400 climbers ascended the mountain to commemorate the 400th anniversary of Kabardino-Balkaria, the regional Soviet Republic.

- A cable car and chairlift, built between 1959 and 1976, ferries climbers up Mount Elbrus to 12,500 feet. From there, most ascend the Standard Route up the south flank to the summit. The route is mostly free of crevasses, making it relatively safe. The Standard Route, however, is not easy with lots of snow, high winds, and a high elevation defeating many attempts. Many climbers attempting the mountain are inexperienced and ill-equipped. Most climbers take the cable car, operating from 9 a.m to 3 p.m., and stay overnight at the Diesel Hut. An alpine start at 2 in the morning allows enough for climbers to reach the summit and descend to the cable car/chairlift in time for the last ride down.

- Climbers regularly die on Mount Elbrus, as many as 30 a year. In 2004 alone, 48 climbers and skiers died on the mountain. Elbrus is considered one of the world’s most deadly peaks with a high ratio of climber deaths to climbers.

- In 1991, Outside Magazine called the outhouse at the now-burned Pruitt Hut at 13,800 feet on Elbrus the world’s nastiest outhouse. The privy gets lots of use by Elbrus summiteers, who drink lots of water and take Diamox, a prescription drug for altitude sickness but also an effective diuretic. The outhouse perches above a rocky outcrop, with a hole in the wooden floor that opens to the snowy world below. Surprisingly, however, it doesn’t smell—everything is frozen solid!

- In 1997, Russian adventurer Alexander Abramov led an expedition that, ahem, drove a vehicle to the top of Mount Elbrus, making it the highest mountain climbed by a vehicle. The 10-man team drove a Land Rover to the Barrels, a group of huts on a rocky road. Above that they struggled for 43 days using tire chains and winches to haul the Land Rover to the summit. The vehicle literally broke apart so the team constantly descended for parts. On September 13 they reached the top and drove around the summit plateau. Then they left to celebrate their success, returning a couple weeks later to get the Land Rover down. Instead of waiting for tire chains and cables, one of the drivers attempted to drive down but lost control and had to bail out. The vehicle plummeted down and came to rest on rocks where it still sits.
Source: climbing.about.com