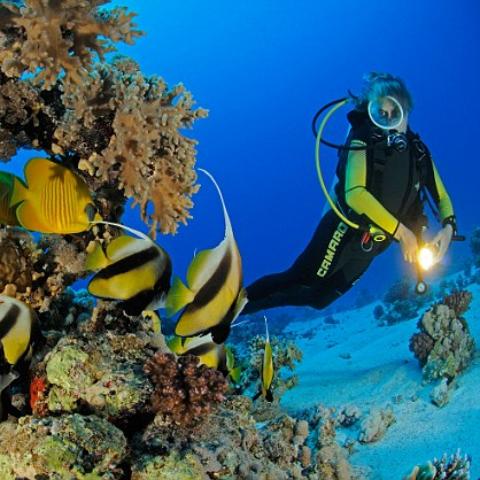 With one of the richest underwater environments, the Red Sea offers a total of over 1,000 species of fish, 10% of which are found nowhere else in the World, 500 odd species of soft and hard coral, 44 species of shark along with thousands of invertebrate reef dwellers. The Red Sea is even considered to be one of the 7 Wonders of the underwater world and has an abundance of different types of dive sites from shear drop-offs, sea grass meadows, coral encrusted wrecks and even a blue hole. If you love diving down deep you simply have to visit this unique and interesting Sea. Top 10 Places to dive in the Red Sea:

1.Elphinstone Reef. Located near Marsa Alam, the famous Elphinstone Reef is excellent for shark encounters. Grey reef sharks, Hammerheads, Silky sharks, Thresher sharks and Oceanic White Tips are frequently spotted here, as well as giant morays, jacks, groupers, barracuda, angel fish and many colourful soft and hard corals, fans and gorgonians. The reef runs from North to South, extending 300m in length with steep drops off along the way. This offers a range of experiences for divers, although these can be limited by strong currents so it's one to watch.

2.The Brothers / El Akhawein. The Brother Islands (El Akhawein is the Egyptian name) are two tiny islands located in the middle of the Red Sea, 200km south of Ras Mohammed National Park. Believed to have been formed by volcanic eruptions, they are barely visible and easy to miss if it wasn't for the 32m high Victorian stone lighthouse standing on Big Brother Island. The winds and currents can make diving challenging here, so this area is recommended for experienced divers only, but highlights include wall dives with steep drop offs and a plethora of marine life such as blue spotted rays, sharks, dogtooth tuna, glassfish, vibrant corals and many other species. Several wrecks are also located here.

3.Ras Mohammed, Sharm el Sheikh. Situated approximately 20km south of Sharm El Sheikh on the southern tip of the Sinai Peninsula, Ras Mohammed was the first National Park in Egypt. Surrounded by magnificent coral reefs, the park features vertical overhangs, beautiful sea walls and a rich diversity of corals, fish and other sea life. Diving is allowed in designated areas only, in order to protect this important marine reserve. Sites such as Anemone City, Shark Reef and Yolanda Wreck are suitable mainly for advanced divers, due to moderate or strong currents, but beginners can dive if conditions are favourable.

4.Habili Ali, Hurghada is part of one of the best and most famous dive sites in the Red Sea – St Johns, a vast collection of small reefs. Boasting majestic walls adorned with huge fan corals and black corals, as well as a plethora of marine life including grey reef sharks, silver-tip sharks and hammerheads, this is one dive site not to miss. Other beautiful reefs worth diving here include Habili Gafaar, Gota Kebir and Gota Soraya, The colourful underwater scenery is breathtaking, whichever reef you decide to explore.

5.The Blue Hole, Dahab. Located off the Sinai Peninsula coast, The Blue Hole is one of Dehab's – and the world's – most famous dive sites, unfortunately notorious for the large number of fatalities occurring here. Despite being so dangerous due to parts of the site being beyond the limits of recreational diving, it continues to attract divers from all over the world. Direct entry into the Blue Hole, which measures 150m wide and 120m deep, is one option, or you can enter just north of the site through 'The Bells'. This 30m chimney descent features a breathtaking vertical drop off into beautiful clear blue waters teeming with corals and marine life. At a depth of 50m depth, 'The Arch' is a 26m-long tunnel connecting the Blue Hole to the open sea, but the danger lies when divers miss the tunnel and continue descending so relevant training and equipment is essential.

6.Daedalus Reef, Hurghada. Located 80km East of Marsa Alam, the beautiful offshore Daedalus Reef offers some fantastic diving for experienced divers. The current is often strong here but the steep walls are spectacular, adorned with a rich variety of colourful soft and hard corals, making the underwater scenery breathtaking. Numerous shark species can be seen here, including Oceanic White-tips, Grey Reefs, Hammerheads and even the rare Tresher shark if you're lucky, as well as a myriad of fish and other marine life. This pristine dive site is undoubtedly one of the best in the Red Sea.

7.Thistlegorm, Northern Red Sea. Diving the Thistlegorm wreck in the Northern Red Sea is an adventure not to miss. This famous merchant warship sank in 1941 after it was hit by a German bomb, and today it is a world-class dive site and exciting underwater playground and museum for wreck diving enthusiasts to explore at their leisure. Amongst the wreckage you will find all sorts of items – from tyres and motorbikes to Bedford trucks, artillery and even wellington boots. There will always be something new to see here, however many times you dive. Marine life is abundant, and you are likely to come across tuna, jacks, moray eels, turtles, pipefish and all sorts of coral species. A unique piece of military history, the Thistlegorm is one of the greatest wrecks in the Red Sea.

8.Boiler Wreck, Saudi Arabia. Located at a depth of 18m, the Boiler wreck is probably Saudi Arabia's most popular dive site. The boiler from this coal-fired ship sits on top of a reef encrusted with spectacular, multi-coloured coral growth. Divers can swim towards the bow and into a crevice in the reef, and then onwards through a coral tunnel leading to an open pool and a series of caves. A wealth of aquatic life such as groupers, turtles and moray eels inhabit this site, so there is plenty to see during this exhilarating dive.

9.Japanese Gardens, Aqaba. Diving in the Japanese Gardens in Aqaba, Jordon, will enable you to observe some incredible flora and fauna in shallow waters close to the shore, which is ideal for beginners. Hawksbill turtles, sergeant majors, moray eels, orange basselets, masked puffer fish and barracuda are just some of the marine life you will encounter as you swim along the edge of this magnificent colourful reef, as well as over 300 different types of corals. This is one of the most beautiful dive sites in Aqaba.

10.Eel Garden - the Pinnacle, Jordan. Named after the vast number of resident garden eels at this breathtaking dive site, which is one of the largest populations in the Red Sea, the Eel Garden in Jordon is famous for its incredible marine biodiversity. The sandy, sea grass bed is an excellent hiding place for all sorts of sea creatures, whilst a magnificent coral pinnacle can be found at 7m, surrounded by hundreds of fish such as frogfish, lionfish and blue trigger fish, as well as black coral, moray eels, red swimming crabs and cleaner shrimps. There are all sorts of other surprises besides. This site is a fantastic place for underwater photography both day and night as the colours are so intense.
Source: thescubadivingplace.co.uk