Do the CRESTA RUN 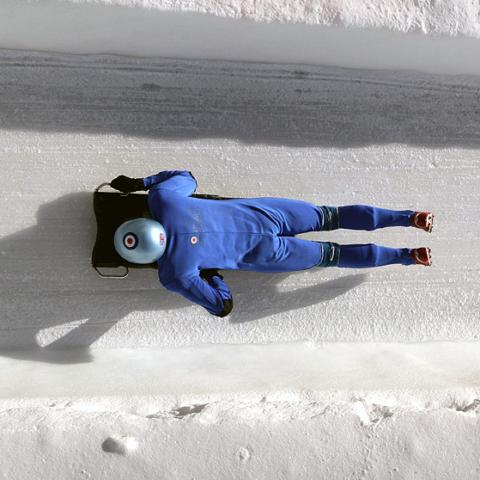 What is the SMTC?
The St Moritz Tobogganing Club is a private Club, founded in 1888, three years after the creation of the Cresta Run.  Its principal activities: ”the conduct of races and practice on the Cresta Run and the encouragement of tobogganing generally” take place during the winter season in St Moritz.. It has approximately 1,300 Members from all over the world.

What is the Cresta Run?
It is a natural ice run, built from scratch every year with snow which is then iced, as from the inception of the Run in the winter of 1884/85. It starts in St Moritz, winds its way through the hamlet of Cresta and ends in Celerina. It is approximately ? mile (1,212 m) in length with a drop of 514 feet (157m). The gradient varies from 1 in 2.8 to 1 in 8.7. There are two starting points, Top and Junction. Riders from Junction begin opposite the Clubhouse, about one-third down the Run from Top. Only experienced riders can qualify to ride from Top.
The Run has 10 corners, all of which are named.

What is the difference between the Cresta, the Bob, the Luge and Bob-Skeleton?
- On the Cresta Run, the rider goes down by himself on a toboggan in a lying position head-first, using rakes on the end of special boots to brake and steer.
- On Bob Runs, riders go down in pairs or teams of four in a metal capsule on runners. One person steers, another operates the brakes. Riders go down in a seated position.
- The Luge. Riders lie on their backs on toboggan, feet first. They ride on Bob Runs and Luge Runs, both singly and in pairs.
- The Bob-Skeleton. As on the Cresta, individuals ride head-first, on similar toboggans, but without rakes. They ride on Bob Runs. (For further information see the British Bobsleigh Skeleton Association www.bobskeleton.org.uk. Those interested in experiencing the Bob or Bob-Skeleton can do so at Lillehammer, through SYS, the ultimate event company: www.sys-ultimate-events.com. )
Around the world there are about 14 Bob Runs, the oldest and only one made of natural ice in St Moritz, and two natural ice Luge Runs. The last three disciplines tend to be dominated by professionals. There is only one Cresta Run. It is unique and it remains one of the last truly amateur sports.

When is the Cresta Season?
Depending on snow conditions (i.e. whether it has been cold enough to build the Run), the Cresta Run is open in the mornings from just before Christmas until the end of February/early March. At the start of the season riding is only from Junction. Riding from Top starts in mid-January. There are over thirty highly competitive races (Members only) and riding takes place every morning of the week – weather permitting.
What sort of speeds are we talking about?
Only a few riders have broken the 51 second barrier from Top: James Sunley is the current record holder on 50.09 seconds. This means an average speed of over 53 m.p.h (85 k.p.h) ending at Finish at a speed close to 80 m.p.h. (128 k.p.h.) The current record from Junction, held by Johannes Badrutt, is 41.02 seconds. Beginners start from Junction and are encouraged to go down in a time of between 65 and 75 seconds for their first couple of rides.

What is Shuttlecock?
The most famous (or notorious) corner of the Run. This long, low, raking, left-hand bank, about half-way down the Run, acts as a safety-valve; if riders are out of control, they are certain to go out of Shuttlecock into a carefully prepared falling area of snow and straw. Fallers at Shuttlecock automatically become members of the Shuttlecock Club and are entitled to wear a Shuttlecock tie (available from the Shop in the Clubhouse). The average fall:ride ratio is approximately 1:12 although this is higher for Beginners.

What are the risks in riding the Cresta Run?
The whole purpose and challenge of the Run is the exercise of the skill and judgement required to negotiate the corners successfully with the minimum loss of speed and time. Thus the risk of falling, or losing control, is inherent in the sport. Because of this factor and the fact that a rider is travelling fast over an icy surface on an open toboggan, riding the Cresta Run is inherently dangerous. Certain banks are slightly convex and designed so that a rider will fall out of the Run if he is out of control or too fast. Banks on bob and luge runs are concave and people fall within the track. A curling stone sent down a bob run will arrive at the finish , but a curling stone sent down the Cresta Run, whether from Top or Junction, will come out at the first such opportunity. All riders ride because they freely choose to do so, accept the dangers at their own risk and must sign a liability disclaimer before riding.

Can anyone ride the Cresta Run?
Although it is a private Club, it is possible for non-Members to ride. Certain conditions apply:
- Riders must be over 18
- Women are not permitted to ride the Cresta Run.
- Non-members may not ride on race days (generally Saturdays, Sundays and one weekday throughout the season.)
Non-members put their names down on the Supplementary List and become temporary Members for one season as ‘SL Riders’ or ‘SLs’.
How do I get on the Supplementary List and ride?
Provided you fulfil the conditions (i.e. you are a) male, b) over 18) the Run is usually open to riders on the Supplementary List on Practice Days during the week. Beginners receive special treatment, which includes an introductory talk from the Secretary, and instruction from the Club ‘Gurus’ – senior SMTC Members with vast experience of teaching new riders how to ride. It is possible to book a ‘Beginner’s Slot’ on the website.
Source: cresta-run.com