Drive in a DEMOLITION DERBY 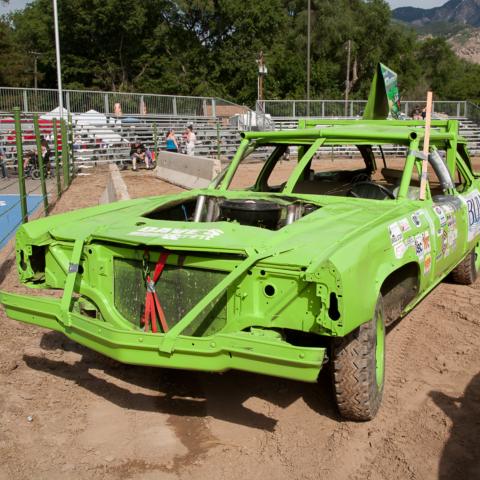 Demolition derby is a motorsport usually presented at county fairs and festivals. While rules vary from event to event, the typical demolition derby event consists of five or more drivers competing by deliberately ramming their vehicles into one another. The last driver whose vehicle is still operational is awarded the victory.

Demolition derbies originated in the United States and quickly spread to other western nations. In Europe, this type of event is called banger racing, although in a demolition derby, racers do not race against each other, instead aiming specifically to destroy the other cars.

Demolition derbies can be very dangerous. Although serious injuries are rare, they do happen. Drivers are typically required to sign a waiver to release the promoter of an event from liability. To make the event safer, all glass is removed from the vehicle, and deliberately ramming the driver's-side door area is forbidden.  The driver's door is often required to be painted white with black numbers or blaze orange, or with contrasting colors, for visibility. Most demolition derbies are held on dirt tracks, or in open fields, that are usually soaked with water. This causes the competition area to become muddy, which in turn helps to further slow the vehicles. Some drivers use both the front and rear of the vehicle to ram the other competitors. Others tend to use only the rear end of the vehicle, to help protect the engine compartment from damage.
Source: performancebike.com, wikipedia.org