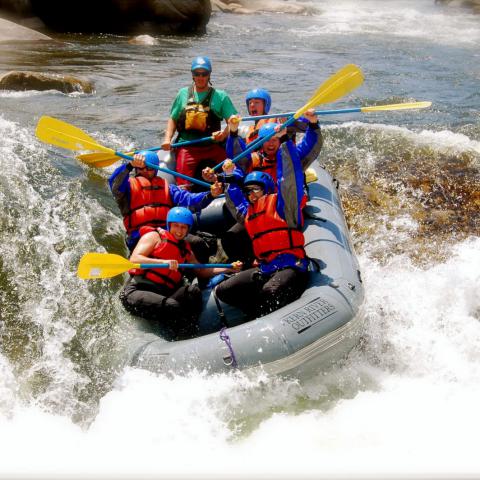 Best destinations:
1.Alsek and Tatshenshini Rivers, Alaska/Canada
Glaciers and icebergs are among the attractions on these two rivers flowing through an astonishing northern wilderness of mountains and tundra on the borders of Alaska and Canada. As well as superb white water, the trip offers you an unforgettable experience of wildlife, from grizzlies and moose to spawning salmon and luscious blueberries.

2.Magpie River, Canada
A float plane takes you to Magpie Lake, the start of this eight-day trip through the remote pine forests of eastern Quebec province. Your first rapids come as you leave the lake for the Magpie River, and from then on they grow in difficulty until you reach the challenge of Class V rapids downriver from the spectacular Magpie Falls. You camp at night on river islands, and to the north you see the pulsating glory of the aurora borealis (northern lights).

3.Middle Fork, Salmon River, Idaho
This is one of the world's most popular whitewater rivers, with everything to offer you—rapids up to Class IV and glorious alpine and forest scenery as it flows through America's largest roadless wilderness area outside Alaska. Wildlife can include the enchanting sight of a mother bear swimming across the river with her cubs.

4.R?o Upano, Ecuador
Around you spreads rain forest, where toucans and iridescent butterflies flit from tree to tree. You glimpse a palm-thatched village of the local Shuar people and may stop to visit it. Starting in the remote town of Macas on the far western fringes of the Amazon Basin, you embark on a journey where the pace varies from gentle rapids to tumultuous rides through narrow canyons. The highlight is the Namangosa Gorge, with Class IV rapids and the sight of countless waterfalls plunging down the gorge's sides.

5.Futaleuf? River, Chile
Plunging from glacier-fed lakes in the high Andes of Patagonia, the limpid blue waters of the Futaleuf? River offer superb rafting among mountain scenery of alpine grandeur. Stretches are suitable for beginners, but there are also Class V rapids that will challenge even the most expert rafters.

6.North Johnstone River, Australia
This stunning trip in the tropical far north of Queensland offers Class IV and V white water amidst volcanic gorges and the ancient rain forests of Palmerston National Park. At night luminous fungi glow surreally on the rocks and fireflies dance shimmering arabesques through the forest canopy. A bonus thrill is the helicopter ride taking you to the start of the course, which is accessible only by air.

7.Sun Kosi River, Nepal
Rising near the border with Tibet, among the world's highest peaks, the Sun Kosi offers a trip of Himalayan majesty on its way to join the Ganges on the plains below. Class V rapids abound as it thunders through narrow gorges and forested canyons. The final stretch takes you through dense tropical jungle where monkeys chatter from the trees.

8.?oruh River, Turkey
The ?oruh is one of the world's fastest-flowing rivers, cutting through breathtaking gorges in the remote and dramatically beautiful Ka?kar Mountains of far northeastern Turkey. Wildlife abounds, from bears to mountain goats to wild boar—as well as fascinating historical ruins, including castles dating from the time of the Byzantine Empire.

9.Noce River, Italy
Fed by melting Alpine glaciers, the Noce tumbles through the wild, remote Val di Sole (Sun Valley) in the Dolomites of northern Italy. It offers some of the most exciting whitewater rafting in Europe, including a spectacular series of Class V rapids as it roars through the gorges of Mostizzolo.

10.Zambezi River, Zimbabwe/Zambia
The Batoka Gorge, where the Zambezi boils and churns its way over 23 rapids in a 15-mile (24-kilometer) stretch below the Victoria Falls, gives Africa's most thrilling whitewater experience against one of the most dramatic river backdrops in the world.
Source: travel.nationalgeographic.com