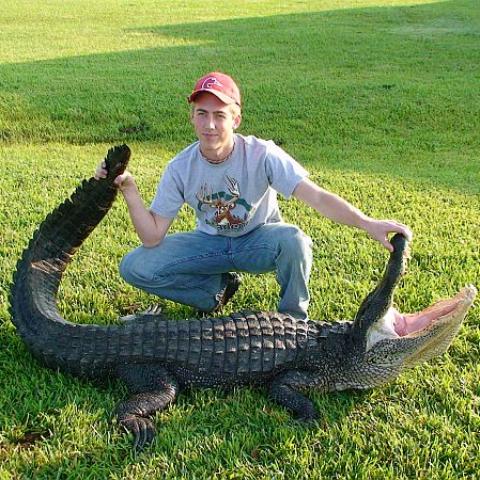 Alligator hunting guides and outfitters can be found in just a few areas in the United States who offer trips and guided hunts for this big game. This type of hunt is one of those lifetime experiences that a hunter should undertake to fully appreciate. From ponds and streams to swamps the outfitter or guide that you hire for an alligator hunting trip should know the best spots in their area.
There are only a few places that allow alligator hunts in the United States. Of course they are areas with warm water and the links below should list outfitters and guides that offer big game trips for alligator.

Alligator Hunting States
- Florida
- Georgia
- Louisiana
- Texas
Information on the Alligator and Habitat
Alligator: AL ih gay ter, is the name of two kinds of reptiles related to crocodiles. The American alligator lives in the waters and lowlands of southeastern United States where outfitters and guides hunt this big game. The Chinese alligator is much like the American alligator in its habits and appearance. It lives in the lower Yangtze River Valley, in China. Other closely related reptiles are the caymans of Central and South America. Caymans are often called alligators as well.

Body of the Alligator: Alligators resemble lizards in their shape, but they have thicker bodies and tails than most lizards. Alligators’ jaws are set with many sharp teeth. Their eyes seem to stick up above their skulls so that alligators can see above the water while their bodies are beneath it. This makes them harder to see when being hunted by a outfitter or guide. They use their short, strong legs for walking, but hold them close to their bodies when they swim. Alligators swim by moving their tails from side to side.
The skin of alligators is tough. When grown, the American alligator is dull gray and dark olive in color. A young American alligator has yellow marks across its body, but these fade after a time. When made into leather, alligator hide is handsome and lasts a long time. For this reason manufacturers make it into handbags, ladies’ shoes, belts, and many other articles.

Alligators in the past grew more then 18 feet and were a big game that many sportsmen planned guided hunts and trips with outfitters and guides for. At present, few alligators can be found that have reached over 12 feet. Male alligators from 11 to 12 feet long weigh between 450 and 550 pounds. Female alligators seldom measure more than 9 feet long, or weigh more than 160 pounds.
Habits: The female alligator makes her nest of grass and other plants, which she forms into a pile about three feet high and seven feet across. She lays her eggs in the center of the pile, where the nest is wet. The eggs are white, hard-shelled, and slightly larger than hens’ eggs. The female alligator usually lays about 50 eggs. She guards her eggs from predators hunting for a quick meal. When first hatched, the young alligators are about 9 inches long. Many remain with their mother until the following spring, but some do venture out and fall pray birds, snakes, large fish, and other small game hunting for food. During the first six years of their lives, both male and females grow about one foot in length each year. After this time, the females grow more slowly. But the males continue to grow at the same rate for several years more. Alligators probably live 50 to 60 years.
In winter alligators bury themselves in mud, go into deep holes, or remain resting under water. Adult male alligators often bellow loudly. They give off a musky odor from glands in their heads.

Alligators eat many kinds of small animals that live in or near the water, including fish, snakes, frogs, turtles, and other small mammals, which include some small game. Large males sometimes hunt and attack dogs, pigs, or even animals as large as cattle. Even humans have at times been attacked on a hunt. Even a man on a golf trip was hunted and attacked by an alligator and dragged into a near by pond. This big game drags these animals under water to drown them, and then tear them to pieces. Alligators do this by grabbing hold of a part of their prey with their jaws and twisting until that part comes off. The muscles that close an alligator’s jaws are very strong. But once the jaws are shut, a man {normally a hunting guide or outfitter} can easily hold them closed with his bare hands. Hunters sometimes capture alligators in this way, without using any weapons.

Alligators and Crocodiles: Alligators are often mistaken for crocodiles but are different from them in some ways. The fourth tooth of the alligator’s lower jaw fits into a pocket of the upper jaw. The same tooth in the crocodile fits into a groove in the side of the upper jaw. It is easy to tell the American alligator from the American crocodile because the American alligator has a much broader snout. Alligators are also much less vicious and active than crocodiles. In the United States alligators and crocodiles are found together only in the marshes at the southern tip of Florida where there are a number of hunting guides and outfitters that offer trips or guided hunts for this big game. It is simpler to think of both alligators and crocodiles as belonging to the great group of crocodilians. This group includes alligators, crocodiles, caymans, and gavials. Any one of them may be called crocodilian.

Where Alligators Live: Alligators were once common in lakes, swamps, and rivers along the Gulf of Mexico and on the Atlantic Coast as far north as North Carolina. They were also found far up the Mississippi River. But so many were killed for their hides or for sport on hunting trips that now they are rarely seen in these areas. In order to protect them, the hunting of alligators is forbidden in many of these areas.
Because of the scarcity of wild alligators, there are a number of farms or “ranches” where these animals are kept for guided hunts and trips or for processing the hides. Here they are fed fish or cheap meat. Thousands of alligators have been kept on a single one of these farms at one time.

Tips for Alligator Hunting
Alligator hunting can be dangerous if you don’t have a good guide or outfitter that knows what they are doing. Alligator’s are very aggressive and will attack if given the opportunity.
- Tip One: Normally the bait of choice is a chicken or fish. Most alligator hunting guides and outfitters know the best ways and are more then willing to share their tips if asked.
- Tip Two: Hanging the bait over the water is the preferred way. You should keep the bait at lest 2 feet in the air. This will make the gator have to jump and be off guard.
- Tip Three: Have a partner when you go alligator hunting. This can save your life if something goes wrong while on a trip or hunt.
- Tip Four: The best way to shoot a alligator is right behind the eyes. This will kill them right away.
- Tip Five: Take a first aid kit with you when alligator hunting. This seems obvious to us, but we thought it was worth mentioning. It is easy to have abrasive scaring if the alligator’s skin rubs your leg or arm hard enough.
Source: huntingtripsrus.com