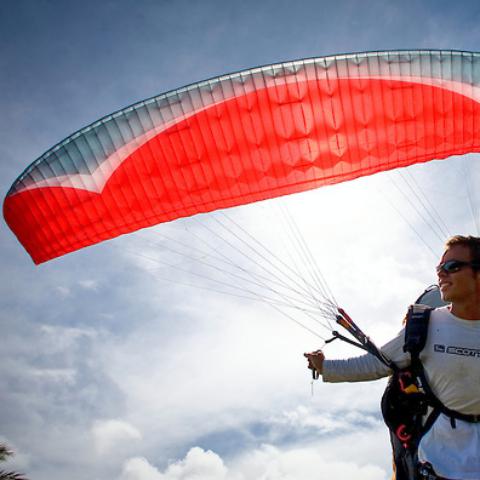 For people who love sports and who love thrill, Paragliding from high mountains is a lifetime achievement. Here's a run-down of the most well-known sites in the world in no particular order.

1.Chamonix / Mont Blanc, France. When it comes to paragliding the French are a dedicated bunch. With the most paragliding sites of any country in the world, it's no surprise that many of the top sites are in France.
Mont Blanc is the highest peak in Europe, located close to the border between France, Switzerland and Italy. There is some amazing flying in the entire surrounding region, and pilots launching from the peak of Mont Blanc at 4,440m (14,500 ft) can either glide down to the Chamonix valley or do some cross-country. Hard-core acro pilots can often be seen throwing their wings around here.

3.Annecy is commonly used for SIV courses because there are multiple launches within easy proximity of the large lake, which makes for reasonably soft landings providing the pilot manages to avoid drowning. Annecy is a very beautiful place, with large mountains and a scenic lake to fly over. Sometimes it's a bit crowded, but it's worth it.

4.Treh, France. The Treh mountain is very thermic in summer, allowing pilots to fly long distances. The landing zone at the bottom of the mountain is in front of the local school, which also has a paragliding shop and very friendly staff. This is also where pilots can wait for the shuttle van to drive them back up to the top.

5.Babadag (Ol?deniz), Turkey. Pilots flying from the Babadag mountain in Turkey can fly over the Ol?deniz lagoon before landing on one of the top 5 beaches in the world. The Ol?deniz Air Games are held here each year, and include paragliding, skydiving, base-jumping, hangliding, paramotor flights, remote controlled plane shows, microlites, hard core acrobatic competitions and accuracy landing competitions.

6.Dune du Pyla, France. Dune du Pyla is the largest sand dune in Europe - 500m (1,640ft) wide, 3km (1.86mi) long and just over 100m (329ft) high. It is also growing. So far, it has eaten a hotel and a major intersection, and it is steadily encroaching on the local motor-camp by a couple of metres per year. Although this sand-dune is disliked by hoteliers and roading engineers, it is well liked by paraglider pilots for it's relaxing, easy flying.
Source: paraglidingmap.com