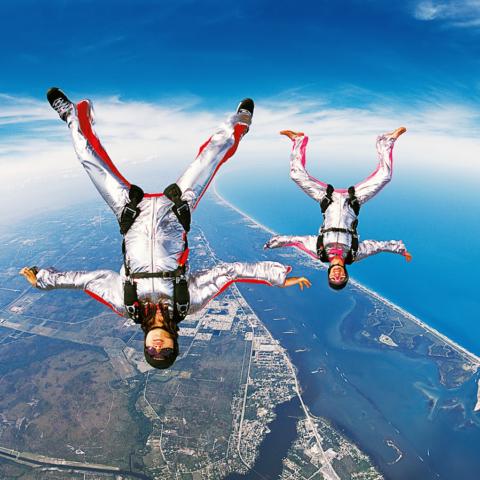 Skydiving becomes a life-changing experience for those who can break through the barriers, the effects of which can be noticed in many aspects of life.
Interesting facts:
-Captain Kittinger recorded the highest skydive from a height of almost 102,800 feet, in 1960. Kittinger descended for almost 85,000 feet freefalling at a speed of 715mph, before deploying his parachute.
-The youngest to accomplish the feat of sky diving was a four year old. The jump was a tandem jump (skydiving while being harnessed to a trainer), and was made from an elevation of 10,000 feet.
-On 6th of February 2004, a group of 357 skydivers joined hands and stayed in that formation for 6 seconds in Takhli, Thailand. This was their 6th attempt.
-The above record was broken in 2006, when 400 divers hailing from 31 countries, took 80 seconds to form a flower-like arrangement in the sky, at a height of over 23,000 ft. This was considered the most difficult group-skydives ever attempted.
-On 20th of May 2001, Michael Zang created a new world record by completing 500 jumps in a day. His jumps were made in intervals of less than 3 minutes and he performed these jumps from 2,100 feet.
-Some of the most daring skydivers include a 92 year old man sporting artificial knees, a hearing aid and weighing 105 pounds who leaped from 3,500 feet did a solo jump and a 90 years old woman who skydived from 12,000 feet to celebrate her birthday.