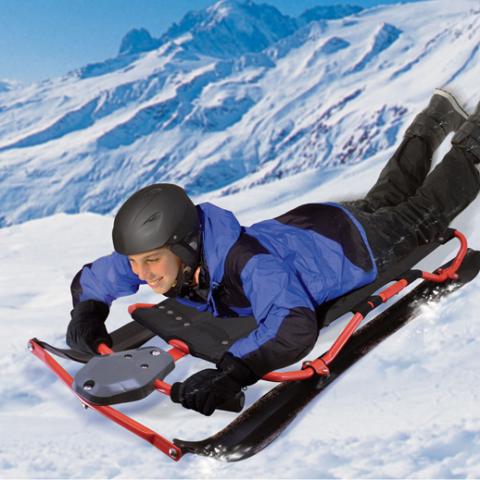 Here are a few things you might not have known about the history of sledding; many of these facts came from Brice J. Hoskin’s The Sled Book: Notes Concerning Winter’s Favorite Pastime.

TOBOGGANS
1. The word toboggan comes from either the Algonquin word odabaggan or the Anishinabe word nobugidaban.
2. The Inuit made their toboggans out of whalebone, while other tribes used birch or tamarack. The sleds had a curved front, to ease traveling over difficult terrain, but had no runners. The design has changed little since they were first developed; today, most toboggans are made with seven boards of ash or maple, each about 2 inches wide.
3. The Russians built the first toboggan slide—a high wooden structure with an ice-covered chute—in St. Petersburg in the late 1800s.
4. Tobogganing as a sport began in Canada in the late 1800s and quickly spread. Though it was considered a "sport," tobogganing was also high-fashion: Men wore top hats and ladies donned their best clothes for trips down the chute.

KICKSLEDS
1. When an unknown inventor took a timber sled—which was used to haul wood out of the forest—and added a handlebar and put iron on the runners, the kicksled was born. They were first mentioned in a Swedish newspaper in 1870.
2. Another name for a kicksled is "spark." (The word for kicking in Scandinavian languages is sparke or sparka.)
3. "Kicksled" is a direct translation of the Finnish word potkukelkka.
4. The first kicksledding club was founded by Captain Victor Balck, one of the original members of the International Olympic Committee, in Stockholm in 1899.
5. Kicksleds can only be used on hard, slippery surfaces, which makes them particularly good for traversing frozen lakes.
6. Average kicksled speed in a race: 18mph.
BOBSLEDS
1. An unknown inventor created the bobsled by adding a steering mechanism to a toboggan.
2. The sled gets its name because early competitors thought it helped to "bob" their heads on straightaways. (They were wrong—staying low makes the sled go faster.)
3. There are two variations on the bobsled. The skeleton, introduced in 1892, is a metal one-person sled that a rider drives lying head-first. The luge is a one or two person sled that puts riders feet first; they steer by pulling straps attached to the runners. The luge replaced the skeleton in the 1964 Olympics.
4. Top speed in bobsled on a modern course: 80mph.
5. A four-man bobsled race was an event in the first Winter Olympics, held in France in 1924. Only men competed until 2002, when two-woman teams were allowed to compete.
6. Bobsledding has been a part of every winter Olympics except for the 1960 Olympics in Squaw Valley, California; too few teams expressed an interest in competing.
7. There are two recreational bobsled tracks in the United States, both at the sites of past Olympic games: Park City, Utah, and Lake Placid, New York. They sleds go through the courses in under a minute, and riders will experience up to 5gs (astronauts experience 3gs on liftoff).

AMERICAN CLIPPERS AND CUTTERS
1. Clippers and cutters were the first mass-produced sleds in the United States. They were made by the Paris Manufacturing Company in South Paris, Maine. The company was founded by Henry Morton in 1861; it was also the first company to commercially produce skis.
2. Morton based his sled designs on horse-drawn sleighs.
3. Yankee Clippers have runners that are upturned in the front; they're meant to be ridden face-first. Cutter sleds were longer, with runners that curved over the front of the sled. They were designed to be ridden sitting down. Both were difficult to steer.
4. The most famous sled in pop culture is Citizen Kane's Rosebud—a Yankee Clipper.

THE FLEXIBLE FLYER
1. The flexible flyer was patented by Samuel Leeds Allen in 1889. Allen was a prolific inventor who held almost 300 patents; he developed the sleds to keep the workers at his farm equipment factory busy in the off-season.
2. The sled had a slatted wood seat and steel runners which were weakened at one point halfway back with something that resembled a hinge. It was moderately steerable, and worked best on hard snow or ice.
3. In 1915, around 120,000 flexible fliers were sold, with an average of 2000 sold per day. The smallest went for $2.50; the largest, which was 8.5 feet long, weighed 41 pounds and could hold six adults, sold for $12.
4. In 1928, six flexible flyers went to the South Pole with Admiral Richard E. Byrd.
Source: mentalfloss.com