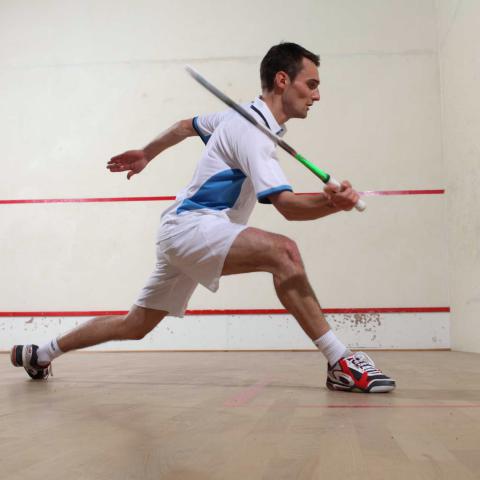 Squash is a fast-moving game that requires skill, speed and supreme fitness.
The ball can reach speeds of up to 170mph and players can burn off up to 1000 calories per hour of squash - higher than most other sports.
It began in the 19th century and was originally called squash racquets, to distinguish it from the game of racquets.

The basic principle is to keep hitting the ball against the front wall until your opponent cannot get it back any more.
Players must keep one foot in the service box as they serve.
The ball must hit the front wall between the service line and the out line, and land in the area behind the short line on the opposite side of the court.
For the remainder of the rally, players must hit the wall above the board and below the out line.
The ball is only allowed to hit the floor once before each shot, but it can hit as many walls as the player wants.
If a player fails to hit the ball before it bounces twice, hits the ball into the floor before it hits the front wall, or hits it outside the out line, then they lose the rally.
A player can also lose a rally if the ball hits them or their clothing before they strike the ball.

SCORING
In the traditional, British system you can only score points when you are serving.
When the player receiving serve wins a rally, the score does not change, but he or she becomes the server.
So if you are facing serve, you need to win two rallies to register a point.
A match is the best of five games, and for a player to win a game they must reach nine points.
If the score reaches eight-all, however, the player who is not serving at the time can choose whether to play to nine points or to 10 points.
During points, a player can be impeded or unsighted as they try to play their next shot, and can ask for a let.
If the referee decides this is deserved, he or she can order the point to be replayed, or award the rally to the player who has been affected.

TACTICS
Experienced players know that the best way to win a game of squash is to make the opponent to do the running.
England's Peter Nicol, a former world number one, says: "If you're at the "T", you're at the centre of the court, you're in control and generally you're in a position to win the game."
Keeping the ball low lessens the chance of your opponent reaching it before it bounces twice.
Nicol says: "The back two corners are the most important areas on a squash court. If your opponent does manage to get it out of there, then you're in a strong position to control the rally after that.
"The other place where the ball doesn't bounce very well is the join between the wall and the floor."

EQUIPMENT
Players use a different ball depending on their standard.
The recognised colours are:
Double Yellow - extra super slow; competition standard
Yellow - super slow
Green or white - slow
Red - medium
Blue - fast
Modern racquets are usually made of composite materials such as kevlar and graphite.
They are 70 cm (27 inches) long, with a maximum strung area of 500 square centimetres (approximately 80 square inches) and a weight between 110 and 200 grams (4-7 ounces).
Source: news.bbc.co.uk