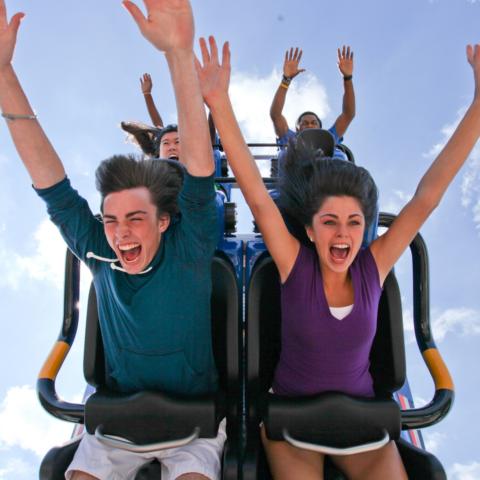 3. EL TORO: Translated as 'The Bull', El Toro at Six Flags Great Adventure in New Jersey features a 76 degree drop, at one point the record for steepest drop by a wooden roller coaster in the world.

4. VOLCANO, THE BLAST COASTER: This winding coaster, built in and around a mountain at Kings Dominion in Virginia, boasts the world's tallest inversion, at 155 feet above the ground.

5.SUPERMAN: KRYPTON COASTER: The Superman ride at Six Flags Fiesta Texas in San Antonio throws you for the biggest loop in the world-- 360 degrees at 145 feet in the air.

6. FORMULA ROSSA: Abu Dhabi is the home of the world's fastest coaster, topping out at 150 miles an hour in under five seconds. Protective eyewear required.

7. TAKABISHA: The Fuji-Q Highland park in Japan boasts a ridiculously steep drop on its Takabisha coaster, sending its riders tumbling at 121 degrees.

8.TEXAS GIANT: The title of tallest wooden-hybrid coaster (a steel track with a wooden frame) goes to this behemoth, located in none other than Six Flags Over Texas in Arlington.

9.TOWER OF TERROR II: Because apparently the first one wasn't enough, the second Tower of Terror in Queensland, Australia was built as the tallest and fastest in the world when it opened, and is still on many top ten rankings.