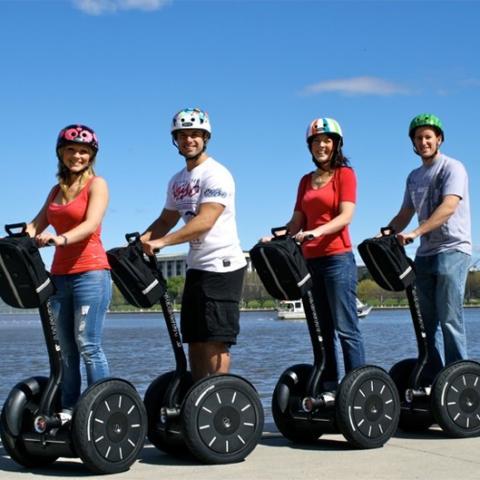 12 Things You Can Do On A Segway
Early on, Segways developed a reputation for being useless and nerdy, but in the last few years people have found plenty of things you can do with, or on, a segway. The personal transporters are becoming more popular as gas prices rise and more uses are found. Keep in mind, these are things you can do if you have the skill and the balance to ride a Segway as they are made to be ridden.

1. PLAY POLO
Segway Polo is just like regular polo, except the players ride Segways instead of horses. The first organized match was in 2004, and now the game is played worldwide, overseen by the International Segway Polo Association. The international championship tournament is called the Woz Challenge Cup (yes, named after Steve Wozniak) and has been held annually since 2006. (image credit: Luiza)

2. OFF-ROAD SPORTS
Some Segway enthusiasts have used a Segway as an ATV, skateboard, bicycle, skates, or an SUV. How fun is it to go "four-wheelin'" on two wheels?
3
. PLAY GOLF
Spice up your golf game with the Segway X2 Golf! It's a special model with tires that won't hurt the turf and attachments to hold your golf club bag and a scorecard.

4. URBAN SIGHTSEEING
Sightseeing can be tiring and hard on the feet. That's why so many cities and historical areas offer Segway guided tours. From Anchorage to Zurich, you can find a Segway tour that allows you to see the sights close up without wearing yourself out.

5. BUILD A WHEELCHAIR
Spanish designer Josep Mora took a Segway, added a seat, a kick stand, a folding handlebar, and ramp. The result is a motorized wheelchair (which is not endorsed by Segway).

6. MAKE AN ARREST
Long Beach, New York police officer Jose Miguez gave chase to a stolen Mercedes while on a Segway. At 12 mph, he couldn't keep up with a car, but he kept the vehicle in sight until the teenagers who stole it abandoned the car as it crashed. It was easy to catch up with the perpetrators when they were on foot. Many police forces and security departments are finding that Segways save them money in many ways. Outfit a police department with Segways and you'll find you can cover more area with fewer officers walking the beat. Replacing just a few police cars with segways saves money on gasoline, maintenance, insurance, and parking space. But most importantly, many law enforcement units purchase Segways with Homeland Security grants, so the initial outlay is practically zero.

7. DELIVER PIZZA
The owner of Nonni's Italian Eatery in Concord, New Hampshire is battling the high price of gasoline by delivering pizzas via Segway. Mathew Mitnitsky modified the Segway to hold pizzas. He says it saves "a ton of money."

8. RACE!
The Segway Challenge is an obstacle course race for Segways. It's a  part of Gen Con Indy, a gamer convention in Indianapolis. They hold open rides for those who want to try it out, and a tournament to see who is the best Segway rider of all. The next Gen Con Indy will be August 13-16, 2009.

9. WALK YOUR DAUGHTER DOWN THE AISLE
Bruce Dickson has a neuromuscular disability that makes walking difficult. He traded in a wheelchair for a Segway to get him where he needs to go. His favorite Segway memory is his daughter's wedding, in which he was able to escort her to the altar on his Segway. Dickson was concerned that he would roll over her dress and tear it, or somehow draw attention away from the bride, but the outdoor wedding came off perfectly. He has also used a Segway for fishing, dancing, and at work.A  Dickson is a lawyer in Washington, DC, a city where Segways are more popular than other places, possibly because of the wide sidewalks and long distances to cover.

10. TAKE A ROAD TRIP
You could ride a Segway long distances, like across the continent, but at a maximum of 12 mph, it would take a long time. 100 days, to be exact, as Hunter Weeks and Josh Caldwell found out when they traveled from Seattle to Boston on Segways. They quit their jobs for the project, a luxury you probably can't afford. But you can enjoy their adventure vicariously by watching the movie 10 MPH. The film is here in its entirety, 93 minutes.

11. DANCE
Some dance perfomances even ballet are being run on Segways.

12. MAKE FRIENDS
Tens of thousands of people have purchased Segways since they went on sale in 2002. More people are turning to Segways as gas prices rise. But those people are spread far and wide. So they meet online at Segway Social, a social networking site for Segway owners. At Segway Social, you can share Segway stories and tips, find a "glide" (a Segway route) map, and meet other "gliders" in your area.
Source: mentalfloss.com