Sleep UNDER the STARS 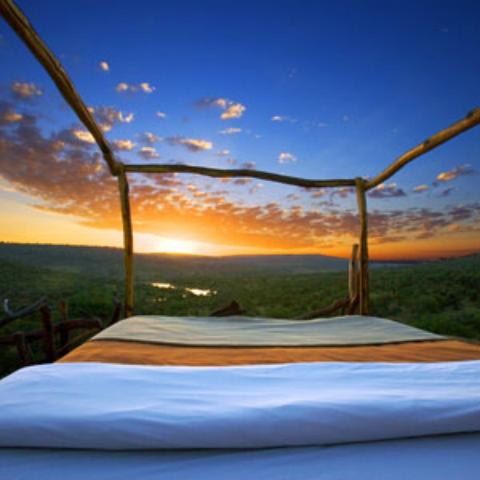 There's something magical about sleeping under the stars—the velvety sky overhead, the caress of cool breezes, a dazzling sunrise greeted with birdsong. But if that whole business of lying on the ground in a sleeping bag makes you want to sprint to the nearest hotel and hide under the duvet, we have a solution: seven extravagant beds that just happen to be outdoors. They're in the most extraordinary locations, too, such as on a photographer's platform in a South African game reserve, atop a 12th-century fortress in Rajasthan, or amid the mesas of southern Utah. So even if camping's not your thing, you can enjoy all the glories of nature with a hearty dose of nurture.

1.Amangiri Resort-Lake Powell, Canyon Point, Utah. A full moon showcases the mesas against the sky. At night the occasional coyote yips, and at dawn bighorn sheep may troop by. Welcome to Amangiri, the extravagant 600-acre resort near the Navajo Nation in Utah as it cuts in near Page, Arizona. This is one of the best places in the United States for star-gazing: The air is clear and dry, and there's very little ambient light. If you'd like less exposure but a more focused relationship with the starry pitch above, six Amangiri suites have Sky Terraces—three protecting walls with the open sky above and a pool below you.

2. Lion Sands Private Game Reserve-Sabi and Sand Game Reserve, South Africa.
Guy Aubrey Chalkley, who founded Lion Sands in 1933, used to tell his daughter when she slept out on the Chalkley Treehouse, 'Never fear the roar of the lion for it is rather when you don't that you need to be aware.' Over the past 60 years, this tree house—built as a photographer's platform—has been reinforced and adorned with a cozy double bed, a hot-water bottle, dressing gowns, and a basin. Guests can have dinner in the tree or dine at the lodge and head out afterward. Once dropped off—with mosquito repellent, torches, lanterns, and a two-way radio—they're on their own till morning. Chances are that during the night you will hear a lion roaring to stake his claim.

3.Blue Mountains Private Safaris-Blue Mountains National Park, Australia.
'You know the song? 'Once a jolly swagman?' asks Mark Tickner, who takes guests into the bush for Blue Mountains Private Safaris. A swagman, he says, is a nomad who sleeps in a swag. But here, the swags are padded, lined with fine cotton, and laid out on decks by the Wollondilly River, 75 miles southwest of Sydney, where the eucalyptus forests yield their oily vapor to the sun, leaving a scent and a blue haze that gives the mountains their name. After days spent hiking the sandstone escarpment and deep gullies, viewing platypuses, kangaroos, wombats, and echidnas, slip into your swag. Dingoes howl, parrots and eagles screech, rapids roar. At dawn, the kookaburra laughs (yes, sitting in the old gum tree) and grazing kangaroos thump around in the bush.

4.L'Albereta, Erbusco-Lombardy, Italy.
Industrialist Vittorio Moretti has a theory about houses, that each should have a pensatoio at the top—a place surrounded by windows where a person can pause, contemplate nature, and refresh. So L'Albereta, his family's Relais & Ch?teaux hotel in the hills of Franciacorta, between Brescia and Bergamo, has the Cabriolet Suite. Atop a tower facing Lake Iseo, you are in the clutches of Northern Italian luxury—sitting on satin, grosgrain, damask; surrounded by vineyards; fed by the great Milanese chef Gualtiero Marchesi. Feeling romantic? Press a button and the roof above the bed opens to the heavens. During the annual Perseid meteor shower (known here as the tears of San Lorenzo), the suite is particularly sought after: Legend has it that for every falling star, a wish will be granted. But the sky is beautiful anytime, and the nights can be full of the perfume of wild roses, jasmine, and gardenias.

5.Loisaba Wilderness Lodge-Nanyuki, Kenya.
Loisaba, on Kenya's Laikipia Plateau, has spurred 10 marriage proposals. "It's all about the beds", says owner Tom Silvester. "They are ridiculously comfortable." You're just off the equator, amid acacia woodland and savanna, not far from the Rift Valley, the birthplace of modern man. There are two Star Bed camps: Kiboko, by a huge water hole that attracts wildlife, and Koija, on the Ewaso Nyiro River (you can hike from one to the other). Inspired by a Mukokoteni handcart and built on an old Land Rover axle, each bed is on a large platform set about 10 feet off the ground and 100 feet apart, ensuring privacy. In the evening, the Masai and Samburu who run the camps wheel them out from under a palm-thatch roof. The air is clear 300 days a year, granting full access to the wonder of African skies.

6. Adr?re Amellal Desert Ecolodge-Siwa Oasis, Egypt.
Adr?re Amellal, built of mud and salt crystals, sits at the foot of a flat-topped white mountain considered holy by the local people. The lodge uses no power except for the generator that runs the kitchen. Outdoor beds are set up on the roof or out in the desert, south of the Siwa Oasis. In an immense 'ballroom' (a bowl between tall dunes), dinner is served at magnificent tables set with crystal and argenterie. Later, Siwan staff in turbans and tunics escort you into the desert. They don't use flashlights; you walk up a dune in the pitch black. On the other side are real beds made of palm reeds, with proper quilts and pillows and Egyptian cotton sheets.

7.Killa Bhawan-Jaisalmer, Rajasthan.
In Jaisalmer, a living fortress high above the surrounding small city of the same name, a Killa Bhawan guest might follow local custom and sleep out on the roof, in a well-made colonial bed. Jaisalmer's magic is magnified by its isolation in the middle of the Indian desert. Known as the Golden City, it was built in the twelfth century of yellow limestone marble and is famous for its palace, which you can see from the terrace, as well as its exquisite havelis (mansions) and seven Jain temples. Night brings a little wind, a clear desert sky, and the sounds of the city bedding down. Three thousand people live in the fort; in the temples, the worshippers sing and drum, then motorbikes head home, and by ten all becomes quiet. Life begins again around six with the bells of the temples and first prayers.
Source: travel.yahoo.com