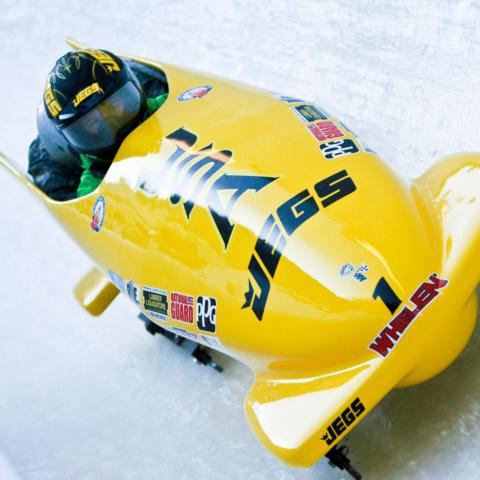 Interesting Facts:
-The name bobsledding came from early racers bobbing their heads backwards and forwards. It didn't work, but the name stayed with the sport.
-The first ever bobsleigh track was built by St Moritz's Palace Hotel owner Caspar Badrutt in 1870. It was subsequently used for two Winter Olympic games and is still in use today.
-Bobsleigh and bobsledding are both correct names for the large sled made up of two sections linked together. The frame is made of metal, the shell of fiberglass or similar material.
-Until the 1950s, U. S. bobsledders were the best in the world, in part because of technological innovations. Bob and Bill Linney in the late 1930s built a two-man sled with a steel plank as the linkage. The plank's flexibility allowed much greater speed through turns.
-In the Olympics and other major competitions, the bobsled run is at least 1,500 meters (about 1,640 yards) long and it has about 15 or 20 turns. The average slope ranges between 8 and 15 percent.
-As with other high-speed sports such as F1, competitive bobsleigh runs are measured in hundredths of seconds, making even the smallest errors affect the final time.
Source: edgate.com