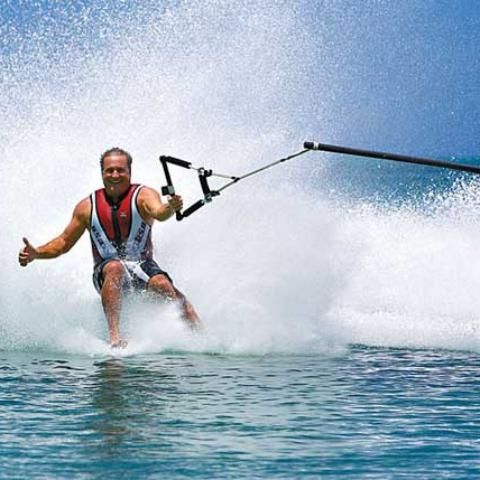 Water skiing sport of riding on skis along the water's surface while being towed by a motorboat. It probably originated on the French Riviera in the early 1920s, and was known in the United States by 1927. The American Water Ski Association, founded in 1939, held the first national championships that year.

In recreational water skiing, the type of ski, length of tow rope, and speed of the boat vary with individual taste. In championship competitions, skis of hickory, ash, fiberglass, or aluminum are used. They must be at least 393/8 in. (1 m) long and not more than about 93/4 in. (25 cm) wide. There are usually three events in water ski tournaments: slalom, jumping, and trick riding. In the slalom the skiers must ski outside each of a staggered series of buoys. In jumping, contestants are towed over an inclined wooden ramp about 21 ft (6 m) long and 6 ft (1.8 m) high; jumps of 150 ft (46 m) from the point of takeoff have been recorded. In trick riding, contestants choose their own routines, many of them remarkably intricate. The World Water Ski Union (founded 1949) sponsors biennial international tournaments. Wakeboarding, which has similarities to snowboarding (see skiing), is gaining in popularity.
Source: encyclopedia.com