SLEEP on a BEACH 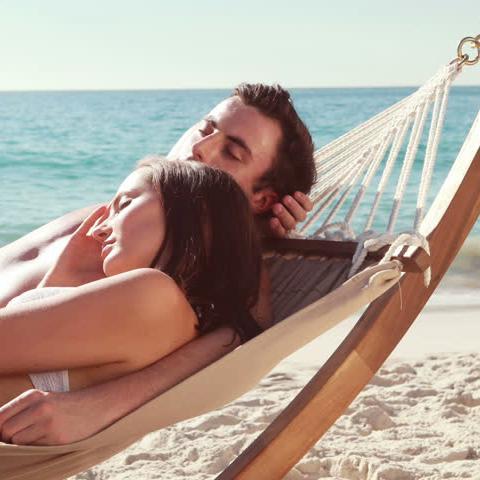 Six of the best places to sleep on sand. Places where you can rest your head to the sound of the waves, from Sweden's archipelago to the Brazilian Beach of Sleep.

1. Spain. Negotiating the spiny foliage to the hidden hippy enclave of Cala de San Pedro in the Cabo de Gata natural park is half the fun. The peculiarly alien landscape of this remote cape is intriguing: this is the costa before the Costas - nature's last stand against concrete. From the pretty fishing village of Las Negras it's about an hour's walk to reach Playa de San Pedro. A graffitied jalopy rusting into the desert proclaims: "Welcome to the pleasure zone." International beatniks and the occasional German nudist come here year round but it never feels crowded. Just pitch your tent between the agaves, get the guitar out and watch the flamingos fly into the sunset.

2. Sweden. The right to roam is written into the Swedish constitution which means in summer it's practically a national duty to decamp to an empty stretch of sand with barbecue, beers and beach balls. Beaches such as Tylesand near Halmstad, where the long-limbed and honey-skinned gather to party, can get overcrowded in summer, but with 24,000 islands in the Stockholm archipelago alone, finding a quiet strand that you can have all to yourself is never a problem.

3. Scotland. Do not adjust your set: the mile-long beach at Sandwood Bay, Sutherland, really does have a psychedelic pinkish tinge. So indeed might your cheeks after the four-mile moorland walk from Blairmore, the nearest road to the British mainland's remotest and, arguably, coolest beach. Just down from Cape Wrath, Sandwood has dunes, cliffs, a sea stack and a handy freshwater loch just behind it. Camp next to ruined Sandwood Cottage and chill with the ghost of a Spanish mariner. Look out for mermaids, too - the last one was seen by here in 1900 so another visitation is surely due soon.

4. Venezuela. Choroni is a gorgeous Caribbean beach about five hours east of Caracas. Tucked between the ocean and Parque Nacional Henri Pittier, a mountain hiker's dream, the beach is a few minutes from an old colonial town of the same name. It's sleepy and bohemian and you can string up a hammock between coconut trees or pitch your tent on the sand. At night, reggaeton tunes seep from nearby bars, while on the beach Afro-Venezuelans drum and hippies dance. Choroni attracts mainly Caracans taking a weekend away from the capital's concrete mayhem, but foreign tourists working their way to or from the Andes comprise a significant minority. With large waves and a strong swell you don't so much swim at Choroni as allow the Caribbean to buffet you. Unlike some of the more exclusive islands this is a democratic beach, accessible to anyone who can afford a bus fare and brave the twisting, winding mountain road.

5. Brazil. Flanked by a lush wall of Atlantic rainforest and with golden sands that stretch as far as the eye can see, the Praia do Sono (Beach of Sleep) in the state of Rio de Janiero is a mecca for Brazilian beach bums and hippies seeking a refuge from the bustle of Rio. Unlike the nearby island of Ilha Grande, where sleeping on the beaches is strictly forbidden, visitors are allowed to camp out on Praia do Sono. There is no official infrastructure here but local fishermen sometimes offer food and drinks to visitors. The beach can be reached by boat from the coastal town of Parati (about four hours) or on foot from Trindade, a picturesque fishing village which is the nearest settlement to the beach and is also a popular hang out with those seeking a spiritual beach retreat. The trek takes 90 minutes.

6. Canada. The largest of the Gulf islands between Vancouver and Vancouver Island, Saltspring's hippy atmosphere is obvious as soon as you step off the ferry at Fulton Harbour. On the south of the island the Ruckle Park campsite stretches for miles along the coast, meaning you can legally sleep on the beach. From there, you might want to use the island's most common form of public transport - hitch-hiking - to get to the famous organic market in Ganges, Saltpring's hub.
Source: guardian.co.uk