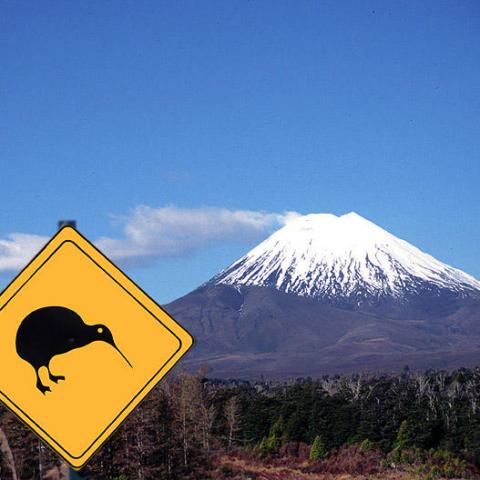 New Zealand is known in the native Maori language as Aotearoa, often translated as The land of the long white cloud. New Zealand is a country of stunning and diverse natural beauty which includes: jagged mountains, steep fiords, pristine lakes, raging rivers, scenic beaches, and active volcanic features. The islands are one of Earth's richest flora zones and is inhabited by some unique fauna, including many flightless birds such as the Kiwi, which is the national symbol.

Interesting facts:
- To become a New Zealand citizen, one must swear an oath of loyalty to Queen Elizabeth.
- Auckland City Sky Tower is the tallest freestanding structure in the Southern Hemisphere at 328 metres.
- New Zealand is part of the Pacific Rim of Fire. Mount Ruapehu, situated in the middle of North Island, is the most active volcano on mainland.
- Lake Taupo was a crater caused by the largest known eruption in the world 26,500 years ago. It is approximately the size of Singapore Island and Caribbean Island of Saint Lucia.
- East Polynesian settlers (Maoris) arrived in New Zealand between 800 and 1300.
- New Zealand and Australasia's highest mountain is Aoraki Mount Cook, standing at 3,754 metres.
- 30% of New Zealand land is forest.
- Gisborne is the first major city in the world to see the sunrise. It is 496.3kilometres away from the International Date Line.
- TheLord of the Rings was filmed entirely in New Zealand.
- Bungy jumping was invented by a New Zealander, A J Hackett, with the world's first site at Kawarau Bridge in Queenstown.
- New Zealand has won more Olympic gold medals, per capita, than any other country.
- New Zealand has the highest ratio of golf courses and bookshops to people than any country in the world.
- New Zealand cities are rank among the world's most livable due to the education, economic freedom and lack of corruption, etc
- There are no snakes in New Zealand.
Source: ezinearticles.com