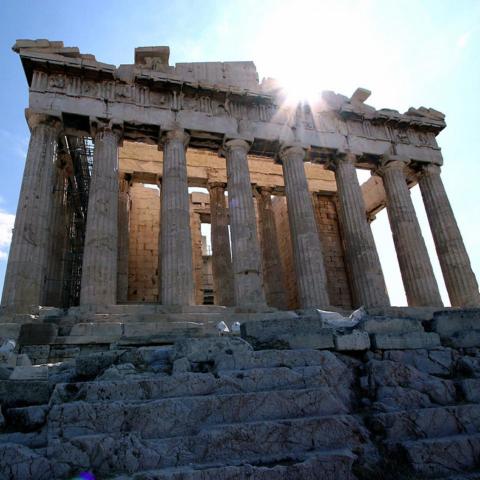 Greece is one of the world's most popular tourist destinations, ranking in the world's top 20 countries. Visitors are drawn to the country's beaches and reliable sunny summer weather, its nightlife, historical sites and natural beauty.
Over 90% of visitors who come to Greece come from other European countries, although in recent years there have been growing numbers of tourists from other world regions.

Athens is the symbol of freedom, art, and democracy in the conscience of the civilized world. The capital of Greece took its name from the goddess Athena, the goddess of wisdom and knowledge.

Sparta a beautiful town near the river Evrotas, located in the centre of the Peloponnese in southern Greece, is the capital of the prefecture of Lakonia. SPARTA ( known in Greek as Sparti) has a history which dates back to the Neolithic period, at least 3,000 years before Christ.
80 percent landscape of Greece comprises of mountains.
There are about 3000 islands in Greece. However, only a few hundred of them are inhabited.
Greece boasts of having 7,000 caves, which form 24,000 km of underground galleries.

Mount Olympus is the highest mountain in Greece, with a height of 2,919m. It is believed to have served as the home of the Gods in the ancient Greek religion.
The popular yo-yo toy, the second oldest known toy in the world, originated in the days of ancient Greece, around 3,000 years ago.
Source: ancientgreece.com