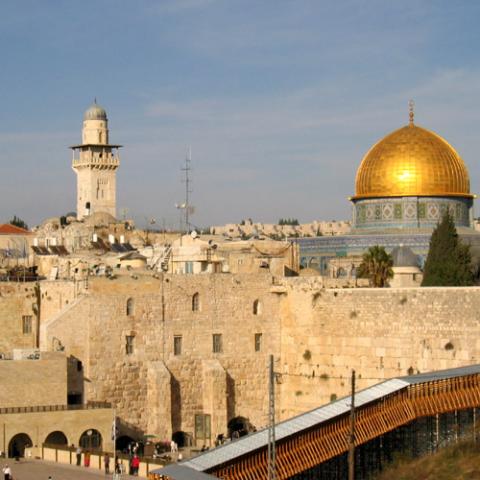 2. Jerusalem Archaeological Park. A visit to the excavations “makes you comprehend the grandeur of the historical city, perched at the edge of the desert.”—Dita Kohl-Roman, publisher, Eretz Magazine. Located at the city’s historical epicenter—between the Temple Mount, Mount of Olives, and Valley of Hinnon. Remains span 5,000 years beginning with Bronze Age.

3. Hezekiah’s Tunnel
“Wading through a dark, 2,700-year-old tunnel with gushing water is a realIndiana Jones experience.”—Michael Kohn, coordinating author, Lonely Planet Guide to Israel and the Palestinian Territories. Built about 701 B.C. as an aqueduct leading from Gihon Spring to the Pool of Siloam. Tip: Bring a flashlight or buy one on-site.

4. Israel Museum. The national art and archaeology museum exhibits local and international art collections, Judaica, and antiquities. Renovations are underway to update the building and exhibits. Also on site: the Shrine of the Book, a sculpture garden and recently relocated Second Temple model.

5. Mahane Yehuda. The colorful produce market has local character and popular eateries by day, hangouts and occasional street performances in the evening. “Best seen when everyone is getting ready for the Sabbath.”—Michael Kohn. Between Jaffa and Agrippas Streets.

7. Museum on the Seam. Symbolically situated at the former crossing point between Jordan and Israel. Celebrates and promotes sociopolitical contemporary art created by Israeli and international artists. “A small but intense emotional experience that represents the mood of the city.”—Michael Kohn.

8. The Old City. “The Western Wall, the Church of the Holy Sepulchre, and the Temple Mount with the Dome of the Rock represent the three major religions”—Gadi Wexler, program director, Yad Ben-Zvi Study Institute. “Walking the stations of the cross makes you feel part of history, and strolling the souks in the narrow cobble-stoned alleys is the most amazing thing in Jerusalem.”—Michael Kohn.

9. Ramparts Walk. “The best parts (of the walk) are from the Tower of David to the Jewish Quarter, and from the Jaffa Gate to the Damascus Gate.”—Gadi Wexler. Ancient Jerusalem stone catwalk atop the Old City walls. Offers unique perspective on the Old City, the modern buildings of the new city, Mount of Olives, and Judaean desert. Tip: Wear sturdy walking shoes, requires climbing high steps.

12. Yad Vashem. “The Holocaust memorial, in a country that was built for and by the survivors, represents the set of values that is at the heart of the country.”—Dita Kohl-Roman. World’s largest repository of Holocaust information. New wing designed by internationally renowned architect Moshe Safdie.
Source: travel.nationalgeographic.com