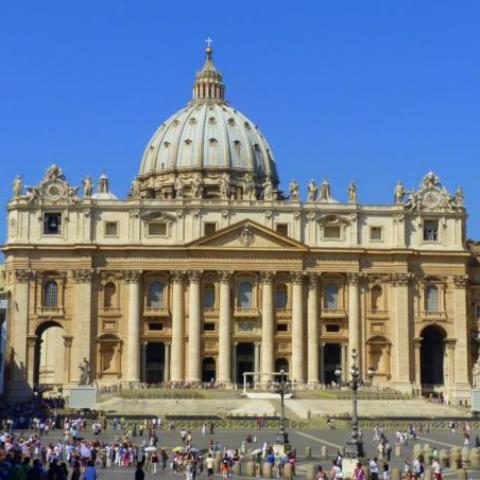 As the capitol of the Catholic church, this tiny walled state within the city limits of Rome draws millions of pilgrims as well as tourists to view the wealth of treasures housed in The Vatican.

Top 10 Things To Do In Vatican City.
1. Have an Audience with the Pope. If you want to see the Pope and hear him speak, then this is the ticket you need! Every Wednesday morning while the Pope is in residence (he spends summers at Castel Gandolfo outside the city), he holds an audience. This normally takes place in a large modern building that seats somewhere around 5,000 people (in my estimation). To attend, you must apply in writing for tickets at least 10 days in advance to the Papal Prefecture.

2. Feast Your Eyes Upon The Sistine Chapel. The Sistine Chapel is home to some of Michelangelo's famous works including The Creation of Adam and The Last Judgement. In 1508, Pope Julius II commissioned a young Michelangelo to paint the 10,000 square foot ceiling of the Sistine Chapel. The artist spent 4 long years creating his ceiling masterpiece from 1508 - 1512. It is said to have taken a great toll on the artist both physically and mentally. That said, he did accept another commission from Pope Paul III to paint the area above the chapel alter with The Last Judgement. It was meticulously painted from 1537-1541. The Sistine Chapel is accessible to tourists via the Vatican Museums (only special guests are allowed entry from the St. Peter's side of the Vatican). Tourists are led in small groups inside the chapel and are given maybe 10 - 15 minutes to take in the walls and ceiling.

3. Visit The Vatican Museum. The Roman Catholic Church has amassed quite a collection of paintings and sculptures by well known artists such as Michelangelo and Raphael. The artwork is housed in a series of buildings that have 1400 rooms and the complex covers 13 acres. While the Sistine Chapel may be the goal of many, most tourists are surprised at the amazing art that they'll uncover along the way as they wind to the chapel itself. Slow down and take it all in. Some favorites along the way include the Raphael Rooms (one amazing Raphael painting after another), the Octagonal Courtyard, the Map Room (walls covered with ancient maps and an amazing ceiling), the New Wing (reliefs full of sculptures dating from 1st century), and the Museo Egizio (a grand collection of ancient Egyptian works).

4. Grab A Seat & People Watch in St. Peter's Square. Peter's Square serves as the main entrance to Vatican City. In the afternoon, the famous St. Peter's Square is abuzz with people fluttering from one amazing site to the next so grab a seat and take it all in. St. Peter's Square itself was designed by Bernini with two semi-circular colonnades (on either side of St. Peter's Basilica) which represent arms welcoming people to the church. The colonnades are topped by a balustrade with 140 statues of saints. The main square that took 11 years to build was completed in 1667. Within the square, there is a 13th century BC obelisk at the center and two fountains to the sides (one by Bernini and one by Maderno).

5. Tour The Inside of St. Peter's Basilica. With the largest interior of any Christian church in the world, St. Peter's Basilica is truly a site to behold. It is over 600 feet long with a dome that rises about 435 above the floor. Upon entering the church, you will be struck with the enormity of the interior space which will hold up to 60,000 people. The current basilica took 120 years to build and was mostly completed by 1626.

7. Go Underground on the Vatican Scavi Tour. Visit the area underneath St. Peter's Basilica to see the underpinnings of the great basilica along with what archaeologists have excavated. Only 150 - 200 per day are led in groups of 12 (broken down by language) into the necropolis below the Basilica. After going 30 feet below ground, the dimly lit narrow passageways must often be walked single file on uneven ground as you duck in and out of rooms in the subterranean tunnels. You'll see the mausoleums where wealthy, early Roman families entombed their dead. And for the grand finale, you'll see what they believe to be the remains of Saint Peter himself in a tomb below the current high altar.

8. Tour Castel Sant' Angelo. Originally built as a mausoleum for the Emperor Hadrian in 135 B.C., this building was transformed into a fortress in the 6th century and served as a refuge for popes for about 1,000 years. For them, it was conveniently accessed via a covered passageway that runs from The Vatican to the fortress itself. In the 14th century, it was converted into a castle and then in the early 1900's, it was converted into the museum that you can tour today. Here you'll find military items such as cannons, prison areas, narrow staircases leading to rooms and frescoed walls, courtyards, and the rooftop terrace. The cylindrical building is best approached from the Sant' Angelo bridge that is lined with angel statues (by Bernini) where it crosses the Tiber River.

9. Tour The Vatican Gardens. Walk in the footsteps of popes who have strolled along these manicured gardens for centuries. Reservations are required for a two hour guided tour of the Vatican gardens (1/2 by bus and 1/2 on foot). You'll see exotic plants, shady paths, and beautiful fountains. The Vatican Gardens feature a typical 16th century design with the focus on structure, sculpture, water, and form. If you are looking for lots of flowers and color, you won't find it in this garden. That said, it is worth a visit for gardening enthusiasts who enjoy Italian-style gardens.

10. Be Amused With Swiss Guard Uniforms. You'll see the Swiss Guard in their colorful uniforms standing guard at all the entrances to The Vatican. The Papal Swiss Guard was founded in 1506 and they have been on duty ever since (that is over 500 years!). The Swiss Guard take their job VERY seriously (which is funny considering those costumes they call uniforms). Recruits must meet all kinds of stringent standards like being single males between the ages of 19 and 30, Catholic, 5' 9" tall or more, and a Swiss citizen with a high school diploma or professional degree.
Source: squidoo.com