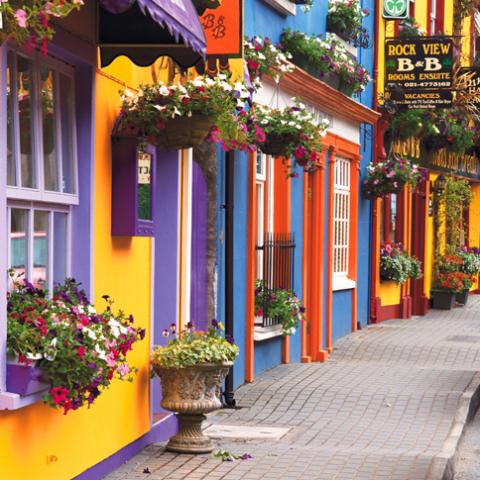 Planning a trip to Ireland can be a daunting task - what should I not miss? Everyone has their own favorite sights and places. Yet there are a number of locations every visitor to Ireland should see. Taking them all in will also showcase the variety to be found on the comparatively small island. They are definitely part of the best of Ireland.

1. Brú na Bóinne. Not a single sight, but a historic landscape on the banks of the Boyne, dotted with prehistoric monuments. The largest are Newgrange, Knowth and Dowth. Newgrange and Knowth can only be visited by tour from the modern visitor centre. Be there early and plan for a half day (at least) to take in the whole experience.

2. The Burren. Wedged between the rough beauty of the Aran Islands and the bustling university city of Galway, the near featureless desolation of this limestone plateau has often been likened to a moonscape. Ancient monuments and bizarre rock formations abound. Some spectacular sights can be taken in by driving next to Galway Bay.

3. The Hill of Tara. The ancient seat of the High Kings of Ireland, now little more than immense earthworks covered with grass. The excellent audiovisual show in the disused church will help in understanding the importance of this site.

4. Dublin City. Best explored on board of one of the numerous bus tours or on foot, Dublin is relatively small. It is however rich in history as well as full of sights and museums. Dublin can keep the tourist busy for a whole week! Avoid the city center on Saturdays when half the population of Ireland seems to go shopping here!

5. Glendalough. Here you will find one of the most important early Christian sights here. And its setting is simply beautiful, in a valley beside tranquil lakes. Lovers of history and/or architecture can indulge in two round towers, St Kevin's Kitchen (actually a church) and a cathedral (ruin). Lovers of nature can simply enjoy the walks along the lakes.

6. Lakes of Killarney and Ring of Kerry. If you want to experience spectacular coastal scenery, breathtaking mountain landscapes, ancient monuments and the tranquil old-world-charm of Killarney's lakes, castles and houses, this is the place to go. Bear in mind that thousands of tourists will have the same idea - the best time here can be had both sides of the summer months.

7. The Giant's Causeway. Northern Ireland's top sight and accessible by car and shuttlebus (if the fairly steep final mile seems too daunting). Strangely regular basalt columns point the way towards Scotland, seen on the horizon on good days. Travellers with some time on their hands are advised to take in the nearby Old Bushmills Distillery, connected by steam train.

8. Cliffs of Moher. An undulating landscape suddenly ends in a sheer drop of more than 650 feet, straight down to the Atlantic. One of the most spectacular coastal areas in Europe. The visitor center has been rebuilt on a grand scale - which explains the high price of a visit.

9. Sligo and Area. The town of Sligo itself is decidedly underwhelming, but the surroundings make more than up for it. Knocknarea has the (reputed) grave of Queen Maeve on top and spectacular sights to enjoy after a steep climb. Carrowmore is the largest stone age cemetery in Ireland. Drumcliff sports a (truncated) round tower, a medieval high cross and the grave of W.B.Yeats right next to the spectacular table mountain of Ben Bulben.

10. Bunratty Castle and Folk Park. The tower house of Bunratty was built in 1467 by the O'Brien family and has been renovated with no expenses spared. A medieval banquet is offered in the evenings, complete with period entertainment. During the day the adjoining Bunratty Folk Park allows a glimpse into Ireland's past.
Source: goireland.about.com