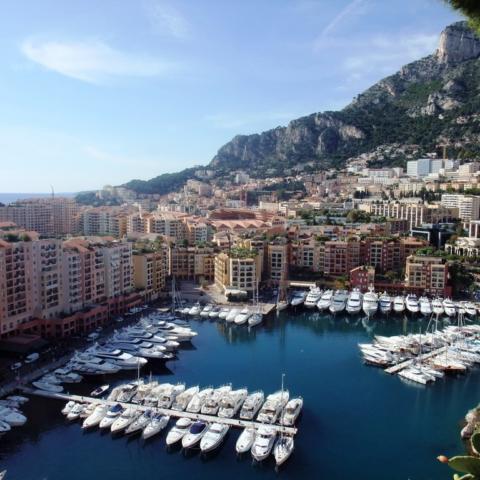 Things to do in Monaco
1. Monaco Formula One Grand Prix. The scent of singed tyres fills the air at May's Monaco Formula One Grand Prix . If there's one trophy a Formula One driver would like to have on the mantelpiece, it would have to be from the most glamorous race of the season, the Monaco Grand Prix. This race has everything. Its spectators are the most sensational: the merely wealthy survey the spectacle from H?tel Hermitage, the really rich watch from their luxury yachts moored in the harbour, while the Grimaldis see the start and finish from the royal box at the port.

2. Palais du Prince. Monaco's royal palace has been around since the 13th century. Every Grimaldi since has found it necessary to leave their mark on the place, and as a result this is not one of Europe's most elegant castles. It is worth taking a look inside though - 15 rooms, including the Throne Room, are open to the public. If you've already blown your cash and can't afford the entrance fee, the changing of the guard won't cost you a cent. It starts just before noon and is over within two minutes, so be on time. Dressed in spiffy white uniform in summer, black in winter, the guards appear apparently resigned to the comic-opera nature of their duties.

3. Musée Océanographique. Stuck dramatically to the edge of a cliff since 1910, the world-renowned Mus?e Oc?anographique - a Prince Albert I (1848-1922) creation - is a stunner. Its centrepiece is the 7.5m-long coral reef, with vivid tropical fish on one side and deep-sea predators on the other. Ninety smaller tanks contain a dazzling 450 Mediterranean and tropical species, sustained by 250,000L of freshly pumped sea water per day. The Whale Room, filled with cetacean skeletons and pickled embryos, and fanciful seabird-covered chandeliers, mosaic floors and oak doorframes carved into marine shapes at every turn complete the mesmerising ensemble. Kids will love the tactile basin; tickets for the 30-minute feel-the-fish sessions are sold at the entrance. Finish with a cup of tea in the aquarium's rooftop brasserie.

4. Monte Carlo's Golden Circle. Monte Carlo's legendary Monte Carlo's Golden Circle is the spot to (window) shop. Get going on av des Beaux Arts, on the southern side of the casino gardens, where you can swirl through Chanel, Christian-Dior, C?line, Louis Vuitton, Yves St-Laurent and Sonia Rykiel. Bow down at the altar of Italian fashion house, Prada, and pay homage to Salvatore Ferragamo inside H?tel Hermitage. Nearby, av de Monte Carlo is a short, chic street with a luxury line-up: Gucci, Valentino, Herm?s, Lalique (crystal) and Prada. Tucked beside the casino is Parisian jeweller Van Cleef & Arpels while Kenzo, Marina Rinaldi, D&G and Christian Lacroix hide alongside more affordable names in the indoor M?tropole Shopping Centre, on the northern side of the casino gardens.

5. Louis XV. Reputed to be the Riviera's best restaurant, Ducasse's legendary Louis XV is the height of sophisticated dining. Set jewel-like inside the opulent H?tel de Paris, the dining room, which looks as though it's been teleported from 17th-century Versailles, sparkles with gold. Nice-born head chef Franck Cerutti uses seasonal ingredients in his themed French menus, with dashes of Italy, Bavaria, Scotland and the Far East to keep things peppy. The restaurant contains the world's largest wine cellar: 250,000 bottles of wine (many priceless) stashed in a rock cave. Reservations are essential, as are jacket and tie for men.

6. Jardin Exotique. Who would've thought cacti could be so much fun? With 7000 varieties of cacti and succulents, the Jardin Exotique is paradise for prickle-lovers. If 7000 cacti is about 6998 too many, the garden is still worth a visit for its spectacular views. Your ticket also gets you a 35-minute guided tour round the Grottes de l'Observatoire, a prehistoric cave network stuffed with stalactites and stalagmites. Admission to the Mus?e d'Anthropologie Pr?historique (Museum of Prehistoric Anthropology) is also included.

7. Grottes de l'Observatoire. Take a 35-minute guided tour round the Grottes de l'Observatoire, a prehistoric cave network stuffed with stalactites and stalagmites, 279 steps down inside the hillside; strangely, it's the only cave in Europe where the temperature rises as you descend. Admission to the cactus collection and Mus?e d'Anthropologie Pr?historique is also included. From the tourist office, take bus 2 to the Jardin Exotique stop.

8. Cath?drale de Monaco. Visitors flood to this Romanesque-Byzantine Cath?drale de Monaco, built in 1875, to view the flower-covered graves of fairy-tale couple, Princess Grace (1929-82) and Prince Rainier III. September to June, Sunday Mass is sung by Les Petits Chanteurs de Monaco, Monaco's boys' choir, although tours in July and August can take the choir out of town. Organ recitals are at held on alternate Saturdays, July to September.

9. Le Castelroc. Opposite the Palace with an entrance ensnared by T-shirt and souvenir shops it might be, but incredibly Le Castelroc is no tourist trap. Spilling out to an al-fresco terrace, its twin dining rooms are the best place around to try authentic Mon?gasque specialities such asbarbadjuan (a spinach and cheese-stuffed doughnut) and pissaladi?re (onion and tomato tart; France's version is tomatoless).

10. Ferrari City Tour. From mid-July to the end of August speed fiends can put their foot down in a cherry-red Ferrari during a Ferrari City Tour around the Monaco Grand Prix circuit. A lap takes 15 to 20 minutes and costs around €35 in the passenger seat or around €70 if you drive (someone comes with you to tell you when to accelerate, change gear etc). Look for the red Ferrari parked near the Rascasse bend at the port.

11. Monte Carlo Philharmonic Orchestra. Going strong since 1856, the orchestra has maintained the tradition of summer concerts in the Cour d’Honneur (Courtyard of Honour) at the Palais Princier. Tickets (€18 to €80), sold at the Atrium du Casino in the casino, are like gold dust. The orchestra performs in the principality's various auditoriums the rest of the year.

12. Digue de l'Avant Port. Take a nautical stroll around the port and up the stairs next to Yacht Club de Monaco onto the Digue de l'Avant Port, a record-breaking floating dike, 28m wide, 352m long and weighing 163,000 tonnes, that doubled Monaco port's capacity overnight when it was unveiled in 2004. From its southern end a path winds along the coast and up through the shady Jardins St-Martin to Monaco Ville.

13. Monte Carlo Rally. January's Monte Carlo Rally is a high-octane three-day series of timed stages, starting and finishing at the port and ripping through Haute-Provence in between. The traditional night stage and the concentration run, where drivers set off from various European cities to meet in Monte Carlo (like Disney's onscreen VW Beetle Herbie in the 1970s), were scrapped in 1997.
Source: lonelyplanet.com