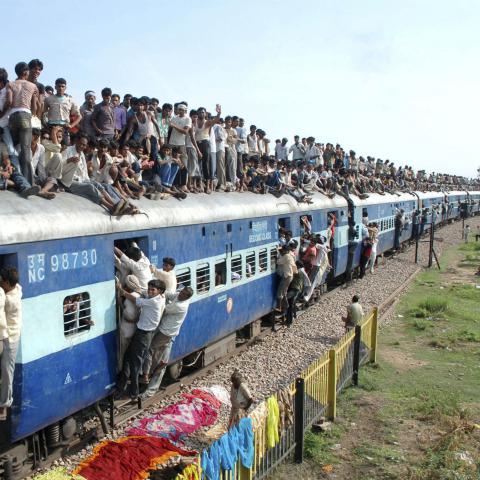 TOP TEN INDIAN RAIL JOURNEYS
From Wes Anderson and Danny Boyle to Michael Palin and Paul Theroux, Indian Railways have entranced dreamers, intrigued authors and inspired filmmakers. That's because there's no other railway like them on Earth. With 18 million daily passengers, 1.4 million employees and 17,000 trains operating on 64,000 kilometres of track, it's a locomotive pick and mix of sizes, speeds, shapes and colours – and that's just the passengers. Home to ancient toy trains, royal trains, Mumbai's infamous passenger trains, the new Duronto Express speed trains and even a hospital on wheels, the Indian Railways have a few tales to tell. Taking a page out of Jules Verne's classic tale, I decided to travel Around India in 80 Trains with Norwegian photographer Harald Haugan in tow, and write a book about the adventure. Between mid-January and May we covered an epic 36,000km – almost the circumference of the Earth – and have selected below the 10 journeys that best reflect the unrivalled diversity of travelling around India by train.

1. Goa Express. Route: Vasco da Gama (Goa) to Londa (Karnataka).On a Sunday afternoon, this train inches past Goan beaches as families splash in the water, friends chat in huddles by the track and the smoke from late afternoon cooking floats into the carriages. Bright pink blossoms hang so close you can reach out and touch them as the train cuts straight into the heart of Goan village life. As it approaches the Western Ghats, the train speeds up through thick jungle, hugging the curves of the mountainside. Keep your eyes peeled for waterfalls in the distance, which increase as the trees thin and the view turns to deep valleys and peaks. On the approach to Londa the sun should just be setting which gives the strange red clay surroundings an ominous glow. Journey time: 3 hours 30 mins.

2. Dibrugarh Rajdhani Express.Route: New Jalpaiguri (West Bengal), Tinsukia , Ledo (Assam). Technically, this involves two trains, but you can't take the second without the first as the Tinsukia to Ledo segment is the easternmost tip of the railway. Starting in West Bengal, the super-fast Rajdhani reaches Assam in no time, vast stretches of emerald green paddy and tea plantations on both sides. Unlike south India's rolling greenery, this expanse is completely flat. As night falls, the train sweeps past the Brahmaputra river on the approach to Guwahati and crawls through the city's slums. Hop off the steps and you'll land in someone's cooking. From Tinsukia, the morning passenger train blasts through awe-inspiring landscape before arriving at the end of the track having squeezed past the backs of people's houses so closely you can see what they're eating for breakfast.Journey time: 16 hours 30 minutes then 1 hr 30 to Ledo.

3. Nizamuddin Duronto Express. Route: Pune (Maharashtra) to New Delhi. One of a new handful of non-stop express trains connecting major cities, the Duronto Express from Pune to Delhi cuts six hours off the normal 26-hour journey. It covers a fantastic route with the most varied topography and the onboard service is excellent. From 11am until sunset, the train trundles past rivers, deserts, mountains and villages and alongside pyramid-like salt mounds drying in the sunshine. Brand new Durontos – meaning "quick" in Bengali – offer tasty meals included in the ticket price, second to none cleanliness, new interiors and a sleeker design for reading lights, phone sockets, berths and bottle holders. The added benefit is that the trains are also derailment-proof. Journey time: 20 hours.

4. Mandovi Express. Route: Madgaon (Goa) to Mumbai. Sandwiched between the Sahyadri hills on the east and the Arabian sea on the west, the Konkan Railway is a stunning route up to Mumbai that hugs India's southwest coastline. The British considered its construction but abandoned the daunting task, leaving it to the Indians to bore through mountains, cross hundreds of rivers and build 92 tunnels and 2,000 bridges – of which the Panvalnadi bridge is currently the highest viaduct in India. The train doors are usually left open on this breathtaking journey that takes you through sunlit paddy fields lined with coconut and mango trees, small villages bursting with wild flowers and over endless stretches of water leading out to sea. Journey time: 12 hours 15 mins.

5. Indian Maharaja Deccan Odyssey. Route: Mumbai to Delhi. Once the ruler of India's railways, the Palace on Wheels has now been dethroned by younger relatives. The elegant Indian Maharaja Deccan Odysseyconnects Mumbai and Delhi via Rajasthan and is the closest option to travelling like the Rajput kings once did - so it's not cheap. It is possible to cover the same route by passenger train, but as most local trains are overnight sleepers without air-conditioning, you lose the charm and beauty of the scenery. During the day, you can go tiger-spotting in Ranthambore, visit the rapidly deteriorating caves at Elloraand Ajanta and spend an afternoon at the Taj Mahal. Onboard activities include watching Octopussy from under a giant duvet, dining in a choice of two splendid cars, reading some Kipling in the lounge, or sipping Bombay Sapphire gin while the golden-red magnificence of the Thar desert blasts by.

6. Island Express. Route: Kanyakumari (Tamil Nadu) to Trivandrum (Kerala). Kanyakumari, the southernmost tip of India and a sacred spot where three oceans meet, is a great point to start an adventure on the railways. The Island Expressleaves at 10.30am and takes just over two hours to reach Trivandrum. As it inches through dense greenery, tightly-packed palm trees and long grassy verges, typical of Kerala, the train fills with a cool lemony-green hue – so sit in general class to guarantee a good view from the doors and open windows. Giant creepers hang down from the jungle-like expanse and if you look carefully in between, you'll see little churches and houses painted like sugared-almonds, ladies banging washing and men squatting in circles playing cards. Journey time: 2 hours 15 mins.

7. Himalayan Queen. Route: Kalka (Haryana) to Shimla (Himachal Pradesh). India's pretty little metre-gauge railway - famous for its 102 tunnels, 87 bridges and 900 curves - was built in 1903 when English ladies would take their leave of the heat and "summer" inShimla. But it's satisfying to see the train used by commuters and those selling their wares up and down the hillside, rather than functioning solely for camera-wielding tourists. As Shimla approaches, orchards bloom with tiny red flowers and thin rivulets of water running down ledges suggest that, post-monsoon, waterfalls must be rife. Cows frequently linger on the track, but the train stops regularly en route anyway so passengers can hop off to loiter and enjoy tea and hot pakoras. Journey Time: 5 hours 10 mins.

8. Jammu Mail. Route: Jammu to Udhampur (Jammu state).Construction of this 53km stretch of railway from Jammu to Udhampur has extended the northernmost reach of the Indian Railways into the foothills of the Himalayas. It's another incredible engineering feat that weaves around the rocky faces of the Shivalik mountain range, over wide-mouthed rivers and plunging valleys. Over 20 tunnels and 158 bridges offer up jaw-dropping views, especially from across the Gambhir bridge. On the approach to Udhampur, the land flattens out into something resembling English meadows. And if you're waiting for the frequently delayed train, the station restaurant at Jammu Tawi does the best omelette sandwiches. Journey time: 3-hour round-trip.

9. Golden Chariot. Route: Bangalore (Karnataka) to Goa. The train weaves across Karnataka, once home to theVijayanagara kings who ruled in south India, and is a popular choice with Indian families on holiday. En route the tour stops at Kabini wildlife sanctuary before arriving at the incredible world heritage sites of Hampi andBadami, strewn for miles with boulders, rock-cut sandstone caves and palace and temple ruins. Sit by your cabin window the evening before arriving in Goa and watch the sun stream through the forests before setting on the hills. You'll find this stretch relatively tourist-free. Onboard the rooms are neat, elegant and well-equipped, en-suite showers are hot and powerful, and the swaying dining cars are straight out of an Agatha Christie novel.

10. The Toy Train. Route: New Jalpaiguri to Darjeeling (West Bengal). Darjeeling's tiny steam train was initially built as a tramway to exploit the difference in the price of potatoes between Darjeeling and Siliguri, and the hill railway is now considered a World Heritage Site. Travelling at a speed of 12kmph, the Toy Train trundles through dense forests, curving around tea plantations and bringing you as close as possible to the tea-pickers with baskets strapped on their heads. Famous for its reverses, loops and the spiral at Agony Point, the railway line eventually criss-crosses the main road through the town and runs alongside the fruit stalls in the street. Above all, if it's a clear day, you should see the snow-capped tip of Kanchenjunga. Journey time: 7 hours 15 min.
Monisha Rajesh is the author of the blog 80trains.com and is writing a book called Around India in 80 Trains.
Source: guardian.co.uk